Filtering the Reversals – What Level to Use

QUESTION: Mr. Armstrong,
First of all, thank you for all you do.  These are crazy times and so many of us would like to thank you for your guidance through these volatile times.

The question I have and I’m sure others do as well is in regards to the election of the reversals.  I was an attendee of the Princeton, NJ conference and have been lucky enough to experience the trader level of Socrates.  I also read your blog religiously and have noticed you speak about 1209, 1309 and 1363 as major reversals for gold.  1209 for the week closing and the gap being up to 1309 and 1363 as the monthly.  My question is that while reviewing the trader level of Socrates I see many reversals between these numbers etc…  Some of them are even labeled as major and others are not labeled as major but have numbers next to the reversals.  Is it possible to get a clarification about this.  I see that the system updates for the reversals show buy and sell levels at various levels(on the blog, where you are long and short) in each market and like you have said its best to just follow the reversals.   I would like to know which reversals to follow and how you decide on which reversals are significant and which should not be traded.  Thanks in advance for your response.

ANSWER: When it comes to actually changing the trend in a market, we look at the monthly level and up; never the daily and weekly. The 1309 is where we start to encounter the yearly resistance level. So there are levels between these points on the daily and weekly level of course. Majors and Minor Reversals exist on all levels. The question becomes which way do we look at and for what purpose? You will get different results depending upon the level. Here is the computer trading ONLY on reversals without using the timing models. Thus, you will not buy the low or sell the high because this is just using reversals on an elected basis rather than selling against them using time for the filter. Note that on the Quarterly level, the computer bought the closing of December for the close of the 4th quarter. We did not elect the yearly number at 1044. You could have used that number and bout it 1045-1046 which was the low with a stop beneath 1044. But the fact the computer bought the close in the quarter level signaled, as I stated, that gold was not as weak as it appeared. I also warned in the Gold Report that it was true we should form a low on the first Benchmark which came in right on target. However, I also warned that this would probably not be the final low and that the second benchmark might be possibly the final low. Why? That was based upon timing. (Will explain in detail in the upcoming 2016 Gold Report).

Now look at how the computer did with gold on each level of time. It was different. 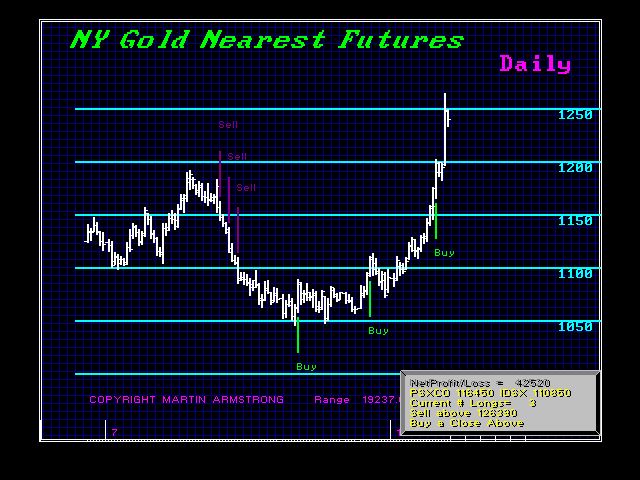 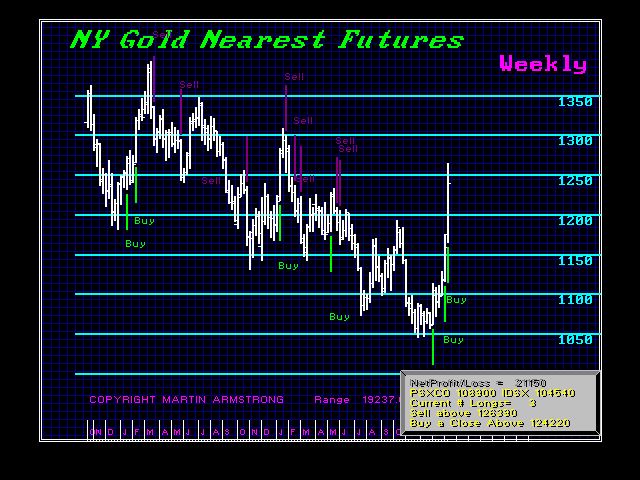 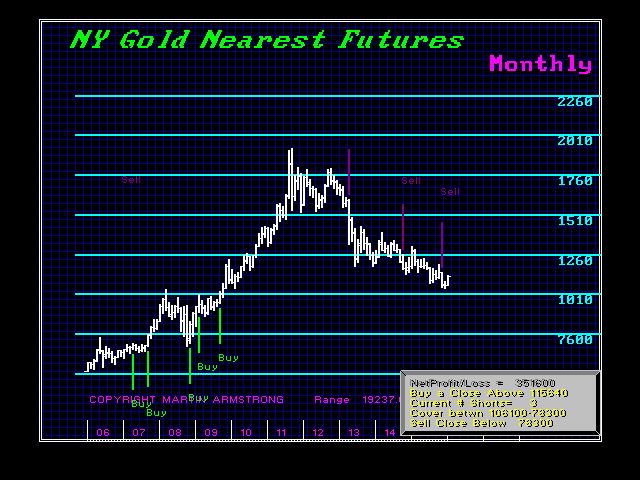 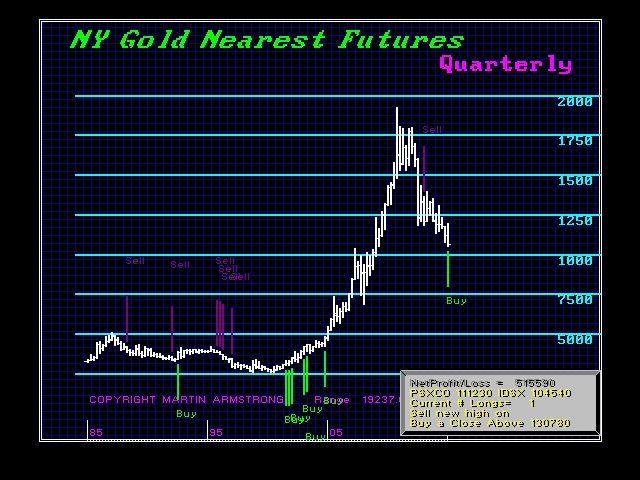 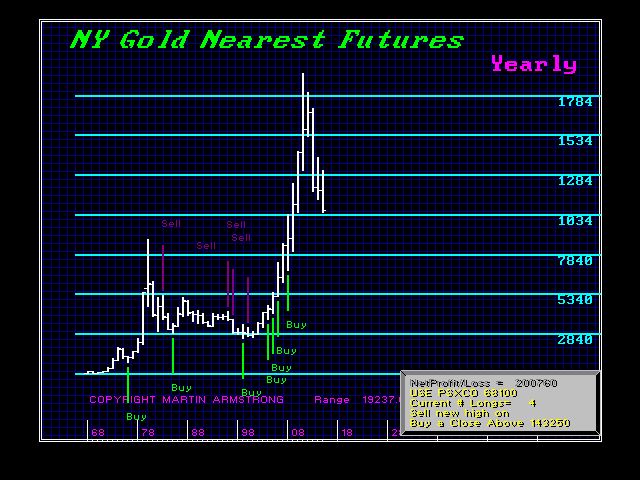 When I am talking about the long-term, I am obviously filtering the reversals and using the monthly and up. That is where the change in trend takes place; not on the daily or weekly. So we filter the reversals with time depending upon your objective. If you are just scalping the market then you look at the Daily, and the Weekly makes sure you do not get caught in a counter-trend reaction that can be a few weeks or 1 to 3 months.

There are additional numbers between 1209 and 1309 so there is no guarantee we will reach 1309, which is where the Yearly resistance begins. When the time is up for the rally, then whatever price we have reached will be it. Saying we had a gap between 1209 and 1309 was correct. You saw a raid $60 move, poking through 1209.

We are expanding the trader version with separate reports written for each level. This will help you to refine what is your trading objective with respect to how active do you want to be. Keep in mind, typically lowering your trading activity increases profits. Far too often, the more frequently you trade, the more you get caught up in bad trades by second-guessing yourself because of risk. That is only human.

What we are porting over is the trading system that incorporates reversals with time. Blending both and using the reversals as exit points allows you to pick the highs and lows for trading.