When you have a consistent system that is running on absolutely everything around the world, you can simply look at it dispassionately and judge everything by the same standards. In gold, euro, Canadian dollar, DAX, and many other markets, we generally moved to weekly, monthly and/or quarterly reversals and then stopped shy of electing them. This typically reflects the reactionary phase that takes people as far as they can go as they buy the high, expecting the trend to continue. They are always trapped in this manner, regardless of the market we are looking at. This emotional human response applies in markets and politics.

There was one noted exception: the Dow. The Dow is the blue chip index, which is the trophy investment for BIG INTERNATIONAL CAPITAL. It did not make a new low, as did the S&P 500 and NASDAQ. The chart pattern is instinctively far more bullish than even the DAX in nominal terms. I have warned that the markets speak to us. Some have asked if the Dow had to make a new low under that of 2015. I stated that the answer was NO. We accomplished our goal of breaking last year’s low to set the stage for a slingshot move to the upside. The Dow was the ONLY real market to elect long-term monthly and quarterly buy signals. We are still waiting for the Weekly Bullish, which has been flirting with the 17750 area.

The market is trying to tell us, “Hey fool, this is not your typical scenario.” All we are waiting for is everyone to wake up and smell the roses before they close the coffin. When the general public at large stops watching sports and guzzling beer and begins to get off their asses and say enough is enough, then we will see this shift from public to private.

Trump is the symptom, not the cause. He just shoots off his mouth and wrongly assumes it is him that the people love. But he is seriously wrong. Trump illustrates just how corrupt the system truly is as we can visibly see how negatively the press treats him at every possible moment. They have their marching orders from the establishment to stop giving him a free ride. The establishment is vowing not to support Trump even if he wins. This further demonstrates that we are just the Great Unwashed; if the people really voted for Trump, those in power would not give a shit. It’s almost worth voting for Trump just to see how corrupt these people openly become, but I think they would assassinate him if history is our guide.

Those in power see this as their country and their rule. How dare the people rise up. Just who do they think they are anyway? Sound familiar? “Qu’ils mangent de la brioche” or “Let them eat cake,” Marie-Antoinette (bride of France’s King Louis XVI) supposedly sniffed. With that callous remark, she became a hated symbol of the decadent monarchy and fueled the revolution that would cause her to (literally) lose her head several years later. While some argue she did not really say that, those were the words attributed to her by the people. She lost her head because of those words, so it really does not matter if she said them or meant them to that extent. The arrogance of those in power today is no different. The audacity of Cruz, who says he will not support the Republican candidate, demonstrates that this is no democratic process. As long as the people vote for whomever the establishment crowns, then the pretense we live in continues. His words demonstrate he will sell the people down the river, which is no different from Hillary doing whatever the establishment tells her or Obama who called the NSA unconstitutional under Bush and then took it even further when in office. 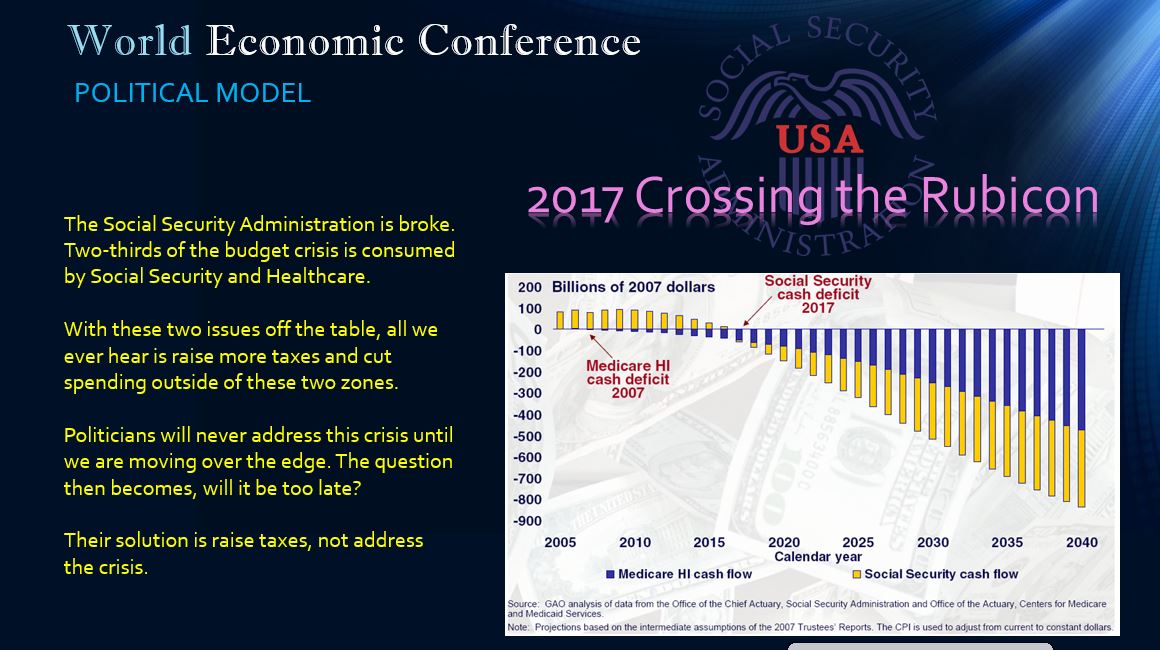 There is no doubt that those in power ALWAYS develop that same attitude of distain against the people they truly view as the ignorant, Great Unwashed. We are the Great Unwashed: too stupid to know how to run a country and too ignorant to know what is best for ourselves. Only the elite know best. So when they abuse their power to the extreme and raise our taxes insanely because they are incompetent and too dishonest to ever manage the affairs of state, then the people will rise up as they always do. It does not matter if it is Hillary or Cruz, for both will raise taxes to maintain socialism, which is rapidly becoming unsustainable.

Above is the government’s own forecast on the budget — not mine. Every politician knows we are screwed since Social Security and Medicare go negative in 2017, yet no one talks about it in the elections and the press is dead silent. The mainstream press is too busy lining their pockets with their privileged position of being the real check against government as envisioned in the First Amendment. They view their right to free speech as an opportunity to bullish us to support their own political agenda that they sell to the highest bidder. So we are close to the tipping point, but not quite there just yet. You will start to hear about this budget crisis next year after the elections.

The markets are positioning themselves now. The Dow still reflects the international net capital movement. Even in debt, blue chip corporations have NEVER defaulted, but governments always do. People tell themselves this time will be different and that the past is no longer a guide since we are technologically advanced now. Politicians are thieves today as they were centuries ago. Technology changes, yes, but humanity never does.

The Dow is confirming what our long-term forecast is saying. The rest of the markets reflect that we are not quite ready for prime time. Do not worry, it’s coming. Just watch the arrays for WHEN.