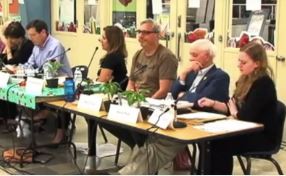 Well if you live in Portland, you better get your kids out of school. The Portland school board is against free speech. Portland public schools have banned all textbooks that cast any doubt on climate change. They are tampering with free speech and denying any scientific examination by converting climate change into dogma and propaganda. This illustrates that once you give any group power over another, they ALWAYS abuse it.

If you remember history, Hitler also banned books. The Nazis orchestrated a massive propaganda campaign to win the loyalty and cooperation of Germans on a major scale. The Nazi Propaganda Ministry, directed by Dr. Joseph Goebbels, took control of all forms of communication in Germany: newspapers, magazines, books, public meetings, and rallies, art, music, movies, and radio. Viewpoints that threatened Nazi beliefs or the regime were censored or eliminated from all media. About a hundred years before the advent of Hitler, the German-Jewish poet, Heinrich Heine, explained history: “Where they have burned books, they will end in burning human beings.”

On May 10, 1933, students and storm troopers came together on the Opera Square in Berlin with books and writings deemed “un-German” and set them on fire. It does not matter what century we are in; the people on this school board are violating the very purpose of civilization. Banning any such book that disagrees with their view that climate change is caused entirely by man renders them no different that the Nazi movement to force compliance with their own beliefs.