China’s Reserves & the Flight of Money 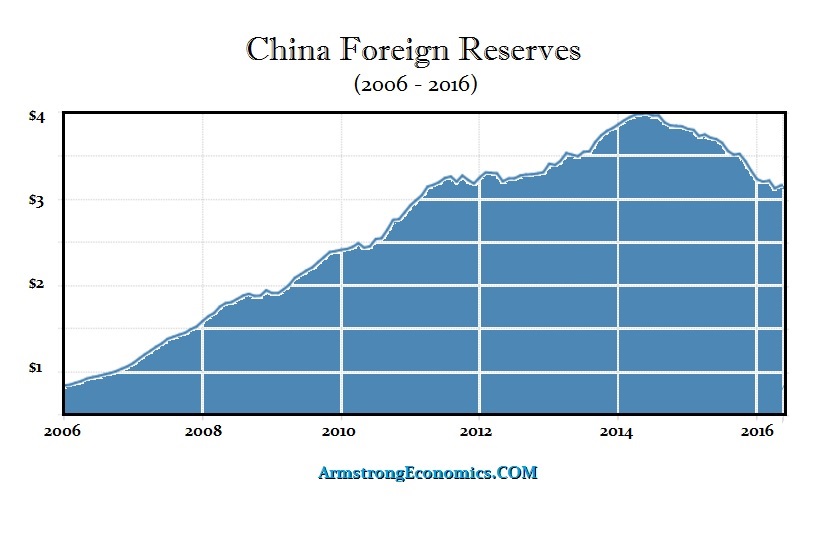 All we have been hearing are claims that if China sends the dollar flooding back to America, the dollar will become worthless and hundreds of businesses will go broke overnight. The gold promoters put out such wild claims and have no idea what they are saying or the type of world that would unfold. It is not in China’s self-interest to dare to do such a thing for their own economy would collapse. Jobs would be lost and unemployment would soar, leading to another revolution.

These people yell the same thing all the time. They want to see America destroyed so they alone can become wealthy and look down upon the rest of society while kicking them in the gut and rejoicing in their pain. I really do not understand such hatred. Of course, they do not want to talk about how U.S. corporations have $2 trillion+ in cash offshore and only about 10% resides in U.S. government debt.

These scenarios are absurd. When China’s reserves decline, it will be because capital had fled China. This is precisely the opposite of what these people are saying. China has sold U.S. Treasury bonds and U.S. equities to raise cash to support the yuan to boost confidence. It has nothing to do with being bearish on the United States. China has no such interest in destroying the U.S. economy or that of Europe. To do so would destroy their own economy and that would only lead to revolution.

These scenarios are just pathetic. China has been suffering from a lack of confidence and capital has been pouring out of the country. The Chinese are the big-ticket buyers of real estate in the United States. China’s reserves have been collapsing as capital has fled. In fact, March was the first time in five months that China’s foreign reserves rose to $3.213 trillion, which was up by $10.26 billion from the end of February, according to data from the People’s Bank of China. The numbers from April showed a second consecutive monthly increase of $7.09 billion to $3.220 trillion.

The problem with all of this nonsense is that they are desperate to create a reason to sell gold to mislead investors. You can fool people sometimes, but not all the time. When they listen to these wild scenarios and they do not pan out, they will lose confidence and stay away from gold. So the promoters could care less about the veracity of their claims. All they care about is selling gold for a profit to investors.

Gold will breakout, but not for such absurd reasons.