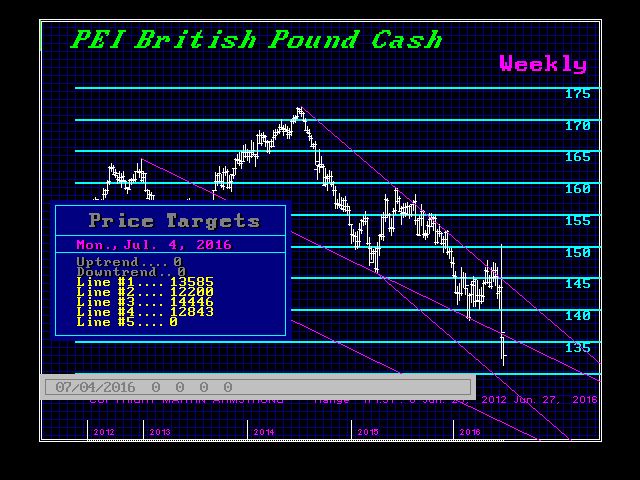 QUESTION: Marty
It looks like Carney and Osborne are talking the pound down in order to frighten people.

Only one of their prophesies have come true – the lower value of sterling.
But it is unhelpful that they continue to be negative – even though they’ve proved to have been wrong on all the other things [cost of borrowing, asset prices, the UK deficit, cancellation of investments].

I fear [being a Brit] that too much unwarranted negativity from their position of power will take the pound down too far. Do you agree that can achieve that and that they, representing the establishment, are trying to win back some of the lost ground? I would say that is treason [not to carney as he’s a Canadian. I’d tell him to go home].

ANSWER: The reason “value” investing and “fair value” theories fail is because markets ALWAYS over shoot and under shoot. Our next real zone for the pound is in the mid 120 level. However, ironically, European concepts of currency value is SERIOUSLY WRONG. Post-World War II, European politicians used the rise in their currencies as proof that they did a good job. That installed this concept that a strong currency was good for the economy which in fact if you are concerned about trade, you want a weak currency. The entire reason the Swiss put a peg on to the euro was because the rise in the franc was reducing exports and major companies threatened to leave.

The decline in the pound will BOOST British exports and have exactly the opposite effect helping the British economy. The EU is doomed. Over taxes, over regulated and it has no meaningful democratic process. Worse still, just as Merkel by herself tried to help her negative image because of her harsh dealings with Greece wanted to appear reasonable, she invited the refugees in without any right of other countries to object. She made a decision as Germany, but it automatically impacts all of Europe. Under the EU, no such power should be allowed if all governments must suffer because of one leader.

The pound will drop to penetrate the $1 par level probably no later than 2018. With the political chaos of French and German elections next year, that decline can take place sooner than later. But this is what will force a monetary reform as early as 2018. The rise in the dollar will reduce US exports and that will put political pressure in the States for reform not to mention a debt crisis in emerging markets.

The peak in bonds appears to be in place. We are seeing the rates rise already in the peripheral markets. This will spread from the peripherals in toward the core. So Southern European rates will rise faster than German but when capital figures out the crisis is the EU, then German rates will rise. The Federal rates in the USA will be the LAST to rise because the initial shock will be foreign capital fleeing to the States.

The remarks of British politicians are to be seen in their context of this false perception that a strong currency is good. You hear Trump criticizing China as a “currency manipulator” implying they lower the value of their currency to increase trade. As the pound declines, this will save British jobs – it’s a good thing; not bad.