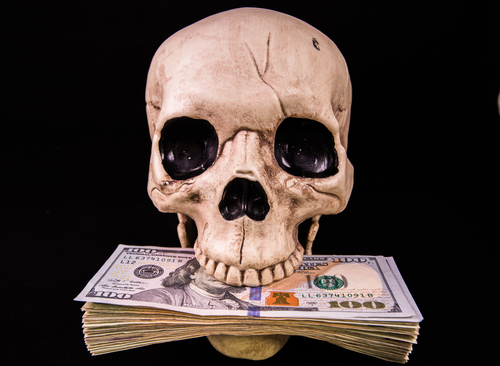 COMMENT: Mr. Armstrong, my family was always farmers. When the death tax was imposed by Democrats, little by little with each generation we had to sell something to pay the taxes. Hillary in Detroit said Trump should not have $4 billion and the state should have got it all. This is money already taxed numerous times and the politicians line their own pockets. I feel Trump will lose and we will lose the farm listening to Hillary.

ANSWER: I agree. People do not look at this estate tax or death tax and it’s goal is very communistic insofar as parents should not be allowed to save for their children and whatever you own really belongs to the state. In other words, government is treating the people the very same way that sent so many people from England fleeing to America to begin with. In Britain, they have the system of long-lease, which is why they had to hand Hong Kong back to China since they signed only a 100 year lease. What happens is you pay for a lease of say 100 years. You were paying the actual fair value of the property had you bought it outright. But at the end of that 100 years, the next tenant must pay the full fair value once again. This is how the “rich” made their money keeping it in the family and never selling land. This is one of the components that made Karl Marx hate the rich. It has been the cornerstone of socialists ever since.

To this day, the sixth Duke of Westminister owns most of Mayfair in the center of the West End of London. The duke and his family, controls swathes of London’s famous Mayfair, including, of course, Grosvenor Square itself as well as an extensive area to the south of Hyde Park Corner including Belgravia landmarks such as Eaton Square. This is all long-lease so it remains in the hands of the family for centuries, yet the full value is pay at time of renewal.

People fled to America so they could actually own their own property and pass it down to their children as do the rich landholding families in Britain. This was the origin of the term “freehold” meaning you could actually own the land. America was the land of opportunity because it was all freehold and people could for the first time rise from the poor rank to that of the rich by hard work, saving, and being able to create wealth for the family unit. This was the American Dream. It is ironic that the Clintons encouraged the bankers to lend money recklessly to create more homeowners which resulted in the 2007 real estate bubble. So on the one hand they champion private ownership, and then want death taxes so you cannot leave things to your children so easily. What they encourage with one hand then take back with the other. Home-ownership has now collapsed to a 52 year historic low thanks to the Clintons.

The Democrats are very Marxist and Hillary’s speech in Detroit shows exactly the type of person she is. She singles out Trump to justify the death tax that then applies to everyone.

“If you believe that he’s as wealthy as he says,” she said, “(killing the tax) would save the Trump family $4 billion. …

“Just think about what we could do with those $4 billion.”

The core of the Democrats is to take other people’s money. They believe in central planning as did the Communists. They have always advocated taking the money from the “rich” and putting in their own pockets as has Hillary. It is amazing how they get away with pretending to hate the rich and then amass wealth from the rich. Hillary was worth far more than any of the 17 Republicans Trump defeated in the Primaries. How can someone so rich hate the rich? By placing all this money in a “foundation” it is tax free and at her disposal. At least Trump had to pay taxes on what he has left. 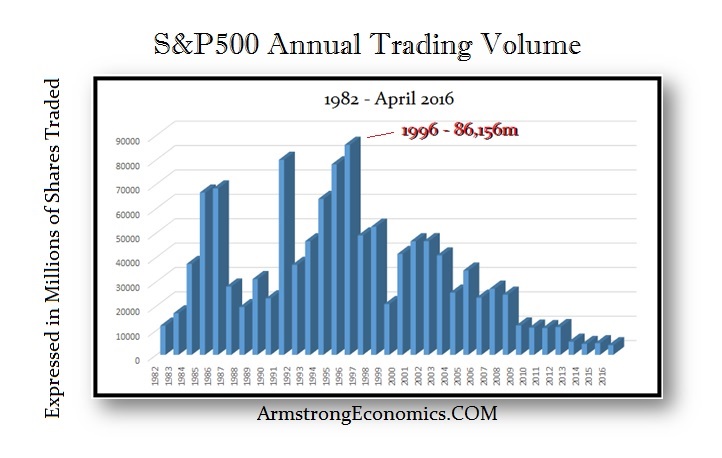 When I say if Hillary is elected I may just leave the United States, I am not being partisan, but practical. I have to look at the long-term direction she would take the country and the bankers will rule economics in this country. If they got their way, they would pass laws preventing people from withdrawing funds or even collecting interest outside of CDs. They want to trade with other people’s money and hand the losses to the government while keeping the winning trades. I fear that we will turn south in a very hard way. Obama has produced the lowest economic growth of any president since the Great Depression. The “recovery” from the 2007-2009 crash has lined the pockets of bankers and politicians exclusively. Trading volume has collapsed. This is the worst possible economic picture in modern times.