Have the Democrats Unleashed a New Age Communist Revolution? 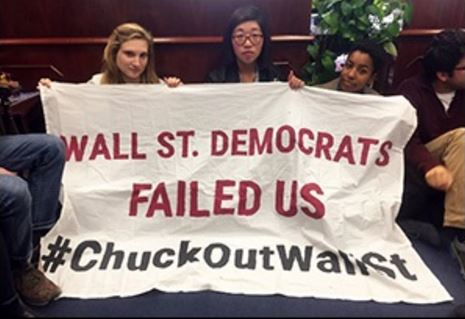 Understand one thing: revolutions emerge from the youth. With all the rhetoric hurled during the campaign, and Bernie Sanders promising free everything at the expense of anyone who works for a living, the youth have become an increasingly communistic generation. Typically, candidates promise everything and nobody really expects them to deliver. This election has hit a nerve simply because it came at the wrong time. The protesters are growing in number with signs that advocate anarchy, “Not My President.” However, they are now staging sit-ins at Chuck Schumer’s office, asking him to step aside as senate minority leader in favor of Bernie Sanders. They are singing this song: “We are standing for our future, we are hearing what is wrong, we are standing for our future, and together we are strong.”

Many schools are now encouraging civil unrest and allow students to skip class if they go protest Trump. Sources told the New York Post which reported that about 200 kids from Beacon High School in Manhattan joined other students in the city to demonstrate in front of Trump Tower and the schools are encouraging them to skip classes to join the protests. This is taking place around the country. Including in Los Angeles Unified School District estimated that 4,000 have skipped classes. Any public school engaging in such activity should immediately dismiss such teachers who are obviously unqualified to teach by injecting their own personal propaganda into the minds of students. You cannot use taxpayer’s money to inspire a revolution that is anti-democratic and inspired by anarchy – their way or no way.

The teachers at Beacon High School should be arrested for inspiring civil unrest when high school students, even assuming they are legally born Americans and not aliens, are TOO YOUNG to vote anyway. This is dangerous and these teachers should be arrested for inspiring riots. That just so happens to be a crime. They are putting the country, the students, and others at risk of violence.

All of this political rhetoric has actually brainwashed a large number of youth. This is all because the War Cycle turned up in 2014. Our model has been warning that the peak in civil unrest would not arrive until 2021. We should not dismiss this uprising so lightly. We are dealing with something that very well may turn ugly and violent. This is what happens when government protects bankers and refuses to prosecute people for crimes that anyone else would spend a lifetime in prison for committing.