Turkey has really turned into a dictatorship and the claimed “elected” head of state acts like anyone other than a democratically elected representative. He has acted more like Stalin, and has been gathering anyone who disagrees and demanding other government return people who have fled from him so he can execute them. The Turkish author Aslı Erdoğan was jailed in August and accused of links to terrorists as well as being a member of the terrorist organization the government labelled PKK. Last week began the trial against this journalist in Istanbul and outside are demonstrators gathered to protest.

She has been detained for over 130 days. She and several other writers and journalists are accused of links to terrorists after writing in the now closed down pro-Kurdish newspaper Özgür Gündem. The arrests in August led to large international protests in autumn. This is showing how if you disagree with government, that is itself a crime. 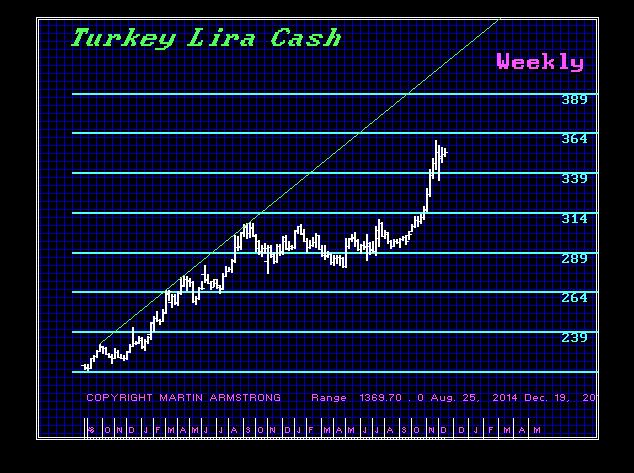 The Turkish currency is showing that it will continue to decline into 2019/2020. The more authoritarian the government becomes, the higher the dollar will rise against the currency. Moving into this type of sharp decline against the dollar reflects the collapse in worldwide confidence in the regime.