When Sovereign Defaults Create a Depression 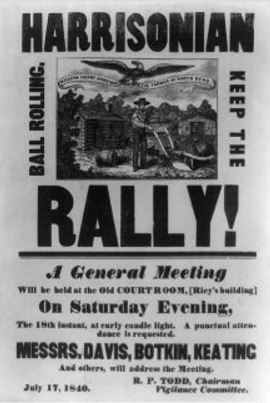 The 1840 Presidential Election took place in the midst of a great depression that was set in motion by State Sovereign Defaults after Andrew Jackson shut down the Bank of the United States, which acted as the central bank. There, the incumbent Democrat, President Martin Van Buren suffered a devastating loss to the new unified Whig candidate William H. Harrison who won 234  electoral votes compared to Van Buren’s 60 votes. They were trying to create the image that the economy was recovering and called it the Harrisonian rally. This poster showed a vignette of the log cabin, the barrel of hard cider, and of William H. Harrison behind the plow.

Clearly, the United States presidential election of 1840 demonstrated how much economics plays into the result of an election. President Martin Van Buren did not create the depression. That was set in motion by Andrew Jackson who create the Panic of 1837. Van Buren fought for re-election against an economic depression and State Sovereign Defaults that wiped out the bond markets. The Whig Party unified for the first time behind war hero William Henry Harrison and came back to throw out the Democratic administration. Their slogan has remained famous “Tippecanoe and Tyler, too.”

This election was unique in that electors cast votes for four men who had been or would become President of the United States. President Martin Van Buren, President-elect William Henry Harrison, Vice-President-elect John Tyler, who would succeed Harrison upon his death, and then James K. Polk, who received one electoral vote for Vice President who also became President late on. 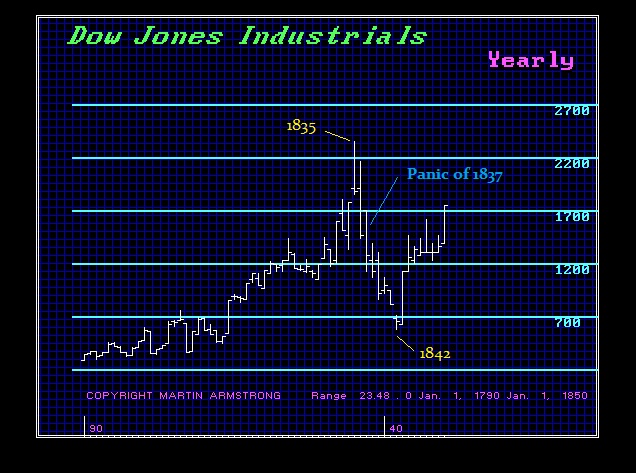 The economy peaked in 1835 with the stock market and declined for 7 years into 1842. Therefore, the 1840 elect of the Whigs did not reverse the trend. It was on September 10th, 1833 when President Andrew Jackson announced that the government would no longer use the Second Bank of the United States, the country’s national bank. He then used his executive power to remove all federal funds from the bank, in the final salvo of what is referred to as the “Bank War.” The market first crashed into 1934, then recovered with a slingshot into 1835, and then the depression was unleashed as the wildcat banks Jackson encouraged went bust and States then issued bonds trying to support the banks. Many states then defaulted on their bonds permanently and we can see that this was the first major sustain correction the United States had ever encountered.