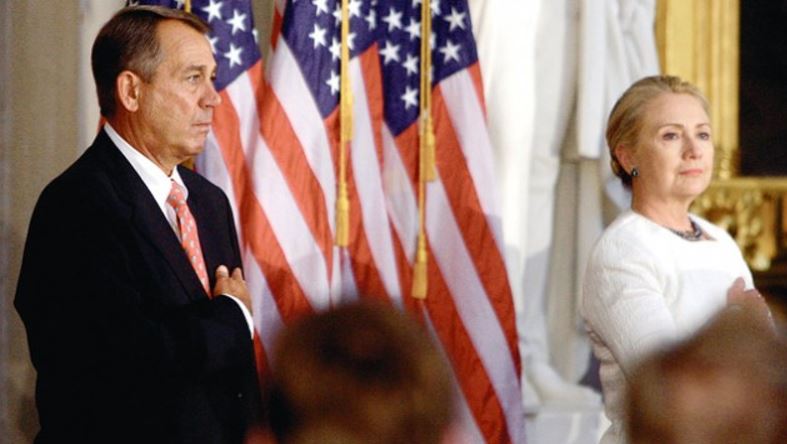 Hillary Clinton is now joining the movement to overthrow Trump claiming, with absolutely no proof, that the misinformation about her was “fake news” spread over the course of the 2016 presidential campaign which was “guided” by the campaign of President Donald Trump.  Clinton now points to compromised intelligence agencies, released in January, headed by Clapper which claimed Russia sought to “influence” and “undermine” the election. She actually had the audacity to say: “The Russians, in my opinion … could not have known how best to weaponize that information unless they were guided … by Americans.” The mere fact that the emails from Podesta were real and not “fake” she now just pretends the opposite.

Hillary is counting on the Intelligence Community (Deep State) that is leaking illegally everything they possibly can to the Washington Post on a daily basis to overthrow Trump. We have John Boehner coming out against Trump and now Hillary. Well Hillary has been blaming everyone except herself. Previously, she was blaming her second loss for the Presidency on men. She said: “Certainly, misogyny played a role. … I think in this election there was a very real struggle between what is viewed as change that is welcomed and exciting to so many Americans, and change which is worrisome and threatening,” she said, before adding, “And you layer on the first woman president over that[.]”

As everyone knows, I was friends with Maggie Thatcher. I have met plenty of women politicians around the world. NEVER have I ever heard any such campaign to vote for them because they were a woman. Hillary is still trapped in the 1960s and I hope she never leaves. The dynamic duo of Hillary and Boehner demonstrates when it comes to money, career politicians are all the same regardless of their party banner.