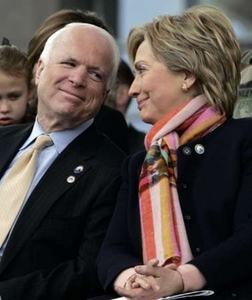 John McCain wants new sanctions against Russia and it is these politicians who are the greatest threat to the world economy. Imposing such sanctions will only backfire for the damage is to European companies, rarely American. McCain is always out to create war for personal retribution for being turned into Vietnam’s version of Tokyo Rose. His latest round of sanctions is to punish Russia for interfering in the 2016 elections which still is yet to be proven, but it put Trump in office, according to McCain who would be much more happy with Hillary. He has never smiled that way looking into the eyes of Donald Trump.

Chancellor Angela Merkel of Germany objected to McCain’s latest folly. She warned that it is indeed strange that the European economy is being targeted in the sanctioning of Russian behavior. “That must not be.” Economic interests and sanctions have never worked. It has not brought down Putin nor has it altered North Korean determination. There was also criticism from SPD politicians and the European Commission. McCain is quickly becoming the real issue in Europe as the man who harms the economy of Europe for personal political vindication.

The US Senate had voted last week for new sanctions against Russia, which is to be punished for an interference in the 2016 presidential election on top of the annexation of the Ukrainian peninsula Crimes. Then there is the support of the government in Damascus in the Syrian civil war, without any mention that this was only to help Qatar get a pipeline through Syria. Syria does not train terrorists to attack the West.

McCain is trying to put pressure on EU companies involved in the construction of the new Nord Stream 2 gas pipeline. This includes BASF and E.ON and OMV from Austria. The sanctions of McCain will not cause Putin to fall to his knees and say he is terribly sorry for exposing the truth about Hillary. So exactly what is John McCain’s objective besides personal hatred of Russia and just about any individual or country that disagrees with him? McCain is the one risking a trade war with Europe – not Trump. The criticism is not directed at Trump for the termination of the Paris Climate Protection Agreement or protectionist tendencies. This round of European criticism this time is directed at McCain leading the Senate with a total of 97 votes.

The EU Commission criticism stated: “It is important that possible new measures be coordinated between the international partners in order to ensure their impact internationally and to ensure the unity of the partners in the sanctions.” McCain seems to be getting rewarded under the table as always, for the sanctions would punish Russia while promoting American gas exports and jobs in Europe give the USA now a net exporter of liquefied gas and is thus competing with the Russian gas delivered by pipelines to the EU. As always, just follow the money.

McCain is trying to stop the construction of a second tube of the Nord Stream gas pipeline through the Baltic Sea, which is to supply additional Russian gas to Germany and the EU. If Trump supports McCain, then look for a break in European/US relations and a potential energy trade war.