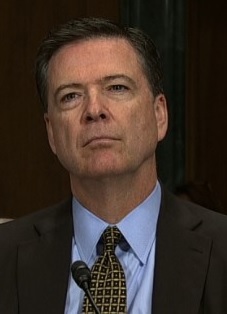 Comey is as guilty as Hillary for treating government work product including top secret information as personal. Comey, just like Hillary, claimed the memos were all “personal” that he made talking to Trump because he did not trust him (contrary to his trust for Clintons). There is no such “personal” qualification and he leaked those memos to the New York Times which he admitted openly in Congress. But those memos contained classified information and that was a CRIME for him to leak them, no less pretend they were his “personal” property. Every FBI agent signed a confidentiality agreement as do traders working for a bank. The agreement signed by Comey states plainly: “all information acquired by me in connection with my official duties with the FBI and all official material to which I have access remain the property of the United States of America.” This means (1) he stole government documents obstructing any investigation of him, and (2) he then leaked classified information to the New York Times. Let’s see; they say Snowden should be indicted for the same thing. Curious!

This is why Comey never recorded Hillary’s “interview” before the FBI to ensure she could never be charged as Martha Stewart was for “lying to the FBI” in such an interview and sent to prison. Comey wrote private memos when talking to Trump, but not Hillary, and then leaked classified information to the New York Times releasing his memos. Legally, he should be prosecuted as they prosecuted Lewis “Scooter” Libby who was Dick Cheney’s chief of staff for leaking information.

In United States v. Libby, he was put on trial for interfering with special prosecutor Patrick Fitzgerald’s criminal investigation of the Plame affair by lying in an interview with the FBI for which he was indicted by a federal grand jury on five felony counts of making false statements to federal investigators. This is what Comey protected Hillary from by not recording the “interview” which is standard operational procedure. Libby served as assistant to the President under George W. Bush and Chief of Staff to Dick Cheney from 2001 to 2005. Bush denied giving Libby even a pardon.

Then Comey granted immunity to Hillary Clinton’s lawyer Cheryl Mills to protect her against prosecution. In fact, Comey strikingly gave wholesale immunity deals to virtually every person who had intimate knowledge of Hillary Clinton’s illegal private server and emails. This protected Hillary beacause nobody would testify against her under threat of imprisonment. Comey abused his discretion and made sure that Hillary could not be prosecuted nor any of her staff.

There is now more than enough information to hand to a Grand Jury for Comey to be indicted the same as Libby. Comey stole government work product (memos) and who knows what else and that is a crime in itself. Then they had classified information – count #2.  And he should be indicted to colluding with Hillary not to record her “interview” and then giving immunity to everyone around her obstructing justice. You give immunity to someone for testifying against someone – not on a wholesale agenda to cover everything up.

If Congress FAILS to prosecute Comey, then Trump should pardon Snowden!!!!!!!! What happened to “Equal Protection of Law” and where is “justice for all” we indoctrinate children to pledge in school? nIf Comey can walk on water, then so should Snowden.