Keeping it Simple Keeps you Stupid 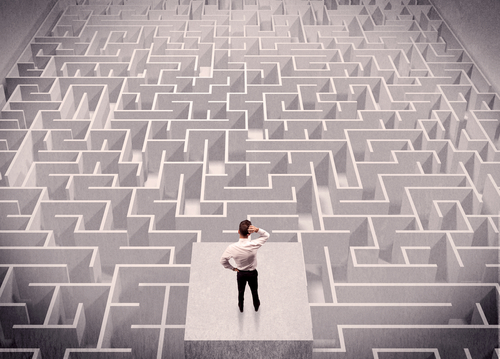 There was a 14th-century Franciscan friar by the name of William of Ockham who is credited with having formalized the principle that “simpler solutions are likely to be more correct than complex ones.” Hence, we seem to always try to reduce everything to a single cause and effect. Some have rephrased this as “keep it simple, stupid,” and it has emerged with the label “Ockham’s razor,” which is supposed to be a tool that cuts through complexity to get from point A to point B.

However, is this the very problem that prevents us from seeing reality? It was, after all, this very principle that supported the flat earth theory. It prevailed and even led to the execution of people such as Giordano Bruno (1548–1600)  for daring to propose that the universe was not revolving around a flat Earth. Even Galileo Galilei (1564-1642) was charged in 1633 by the Roman Inquisition and forced to sign the confession or suffer the same fate of Bruno that the Earth was flat.

In funds management, the statement that proves there is complexity is a legal requirement: Past performance is not a predictor of future success. All investing involves the risk of loss. While there is a desire to make complexity simple and understandable, this is really completely misguided. Clearly, simplicity rather than complexity is by no means the proper course of action for we then cannot see the interconnections of how everything truly functions.

The greatest mistake in the analysis is always trying to reduce any effect down to a single cause. The world is a complex mechanism. It is indeed like a rainforest. There are countless species and each is interconnected. Exterminate one and you will find that it was the food source for another. That species, in turn, was the food source for yet another and so on.

The world economy is equally complex. This is why I say we are ALL CONNECTED. Create a war in one region, we may not be involved with troops, but the capital flows shift. How can we forecast anything by ignoring all the interrelated influences?

There are those who advocate that the best way to achieve your long-term investment objectives is to keep in simple. Yet they are looking at history and banking everything on a continuation of inflation. I have told the story at conferences how I bought a 328 Ferrari when I lived in London in 1985 when the British pound fell to $1.03. The Italians were getting $60,000 for the car in the States. It was still priced in pounds when it was $2. I bought the car for about $35,000. The Italians could no longer sell cars at that price so they doubled the price in pounds. Then the pound rallied and went to almost $2 again. I drove the car for 2 years, sold it used, and nearly doubled my money. Then people were buying Ferraris as an investment, thinking it was the car that appreciated when in fact it was just a currency play. If you did not look at the currency, you missed the whole point, so keeping it simple indeed made you stupid.

Rapid technological development in recent years across industries has helped to expose the fact that we live in a global economy and are all interconnected. Fund managers, because of regulation, are blinded by this interconnected world for they are not allowed to invest globally in a diversified portfolio. This is why we have so many specified funds and people claiming to “just keep it simple” with a hold policy because it always comes back.

Markets, on the one hand, appear deep and complex, rendering them impossible to understand fully when limited even by law to a purely domestic view. This has resulted in the advice of buy and hold as a strategy to fight against complexity with simplicity. Then there are investors who believe they need investment solutions that are nimble and flip positions based upon the talking heads on TV. They are brainwashed by their market myths. This has merely become grand sophistry trying to fight complexity with a simplicity that sounds logical by reducing all activity to a single cause and effect.

Asset allocation philosophies have emerged which invest other diverse market sectors knowing that they are polar opposites. They assume that the world is too complex beyond their comprehension so spread the wealth and hope for the best. These strategies have expanded as of late beyond the traditional stock/bond mix that was really exclusively domestic-oriented. In modern times post-1985, alternative strategies emerged introducing hedge funds that also incorporated foreign exchange, commodities, options, private debt, venture capital, and even real estate.

As hedge funds began to report their 2018 performance, an abyss quickly emerged between managers who outperformed the index and those who saw staggering losses with a third group landing somewhere in between. Overall, the industry saw its biggest annual loss since 2011, declining 4.1% on a fund-weighted basis, according to Hedge Fund Research Inc. Mostly, the smaller funds were able to flip portfolios quickly and that allowed them to trade around the big funds that can no longer maneuver. Most were unable to navigate the market turbulence in what became the worst year for the S&P 500 Index since the financial crisis. Most took “views” of what they thought would unfold and it cost them dearly. The funds that relied upon a personal opinion proved to be the worst for the vast majority kept viewing the stock market would crash any day, which never happened.

The illusion that simplicity provides the best long-term investment return is really predicated upon an assumption since the Great Depression that if you just held through all the 50-70% corrections you would be OK at the end of the day. The problem with this argument is that we are all human. I have never met someone who can actually do that. Then there is the problem of surviving the long-term. The city of Detroit suspended its debt payments in 1937 and resumed in 1963. If you owned such bonds for retirement, perhaps your heirs benefited, but you would have died broke and starving. It all depends where you are in the business cycle.