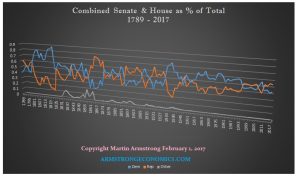 I have been warning that our computer has been projecting the decline and fall of socialism. Moreover, we have pointed out that the Democrats are actually in a long-term protracted bear market and ever since the first election of FDR in the Great Depression, they have been making lower highs and deeper lows. That in market terms is the definition of a bear market. This does not speak well for the Democrats come 2020.

Here is the chart showing the Labour Party’s devastation. They have been sent back to the Great Depression levels of the 1930s. Britain’s election has been a confirmation of our computer’s forecasts and as you can see the Labour Party made new lows. The Democrats are also facing the same potential dangers for they have been moving too far to the left of what is very clear, the majority of people are far more moderate. The Democrats are cheered only by the fringe who make all the noise and this is what misled Britain’s Labour Party because they heard the cheers while failing to listen to the dead silence of the majority.

We have entered a period politically where the longer-term threats to progressive parties are rising both culturally and politically. Indeed, there is a lot of truth to what Oscar II said that everyone is a socialist before 25 because they think with their hearts. Then they graduate and get their first paycheck. If they are still socialists after that, he said they have no head.

Indeed, 57% of Democrats and 51% of young people have a positive view of socialism, according to Gallup polls.  That’s has been frightening to many who see this as a class war that will only end in blood in the streets. They never look at how this economic theory has been responsible for more than wars and religion combined. They ignore the record of countries who have tried this economic theory, from the Soviet Union and Mao Zedong’s China to Venezuela still desperately trying to force it to work at gunpoint. What broke these economies was the collapse in economic growth, the rise in hunger, and the rise of authoritarian government to try to force this theory upon the entire population. Whenever one group imposes their will upon another, the purpose of civilization comes to an end.

The most significant warning for Democrats from Jeremy Corbyn’s shocking political disaster in the British election is that when a political party is consumed with Marxism, its own ideological debate ceases to exist and opponents are often suppressed. They historically risk losing sight of the majority of the population who are drowned out by the cheers of their declining own base. While the press is fake and it is so desperate to want to join the Euro in Britain and the impeach Trump in America, they too add to the confusion by making people think the majority are leftists who are out to rob them of their assets and future.

The Conservative Party won seats across Labour strongholds showing that Labour had moved too far left. The Conservatives won the support of the opposition party’s traditional blue-collar base for the first time. Even the unionized industrial workers voted conservative. The Conservative victory was up there with the 2016 Trump Revolution.

The 2020 election will be marked by violence. Already in Britain, the youth have been rioting using the same nonsense chanting “Not My Prime Minister.” We are witnessing the death of Democracy. Either they win, or they refuse to accept the results of an election. The same will be taking place in the United States on a grand scale. If you really want to protect your children, look at the college before you send them. Any such institution engaged in brainwashing your children just refuse to fund or allow your children to apply for a student loan.