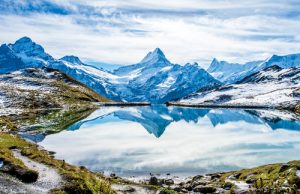 COMMENT: Mr. Armstrong, the data used by the climate change movement only dates back to 1850. Here in Switzerland, they state that the Alps Glacier peaked with Tambora in 1815 and has been retreating ever since. If the last Little Ice Age ended in 1850, the climate should have been warming naturally from that period. It is indeed getting colder with each year since 2015 as you have warned. It seems as though independently they confirm your forecast yet strangely claim there is global warming due to humans. One only has to scratch the surface to see these claims do not add up.

REPLY: The current glacier retreat in the Alps, which is due to an instrumentally documented temperature increase, constitutes the
most recent phase of a retreat period that started after the last Little Ice Age maximum around 1855. Since that date, about half of
the Alps’ glacier area has been lost. This is by no means due to humans. It grew during the Little Ice Age and it indeed reached its peak during 1815/1816, which was “The Year Without a Summer” due to the volcanic eruption of Tambora that created a volcanic winter.

You cannot analyze all glaciers with the same criteria. Steep smaller glaciers change length more quickly (whether in advance or retreat) subsequent to climate forcing than large and relatively flat glaciers do. Consequently, the Great Aletsch, which is the Alps’ largest glacier, has continuously retreated since its last Little Ice Age maximum about 1850. However, other Alpine glaciers (Gepatschferner, Lower  Grindelwald, and Suldenferner) have re-advanced two or three times during the same period, especially around 1920 and 1980.

Anyone who looks closely at the data from glaciers will see the stark differences affect comparisons of the length change history of different glaciers. Short but strong mass gains during the volcanic “Year Without a Summer” in 1816 have also greatly resulted in dynamic reactions with fast and very rapid advances that a few Alpine glaciers have undergone. One example is the Suldenferner in very short time periods of just a year or two.

It is obvious that very specific topographical situations allow for such sensitive reactions to massive snow/ice mass gains which are dependent upon the dimensions of individual glaciers (1). Comparisons of the Holocene length-change history of Alpine glaciers are
usually based on the relative extents of the same glacier observed for the past 150 years. Therefore, the shape of a retreating glacier’s tongue, as they call it, can differ greatly from that of an advancing glacier and influence the interpretation of a glacier tongue’s relative position.

It is interesting to see how poorly the analysis has been put forth with the claims of shrinking glaciers attributed all to humans. They ignore the fact that not all glaciers are the same and begin with the assumption that the peak of the Little Ice Age in 1850 should be the norm. That is no different than trying to claim the stock market ONLY advances based upon looking at the data only since 2009. They clearly have a hidden agenda and pretend to be putting forth scientific proof which is skewed and manipulated.