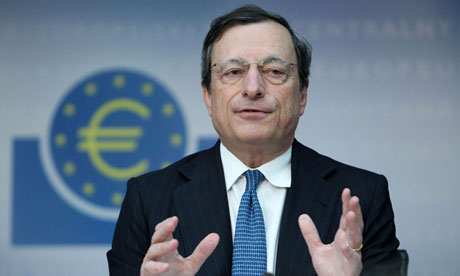 Mario Draghi cannot possibly admit that he is dead wrong in managing the European economy. This idea that continuing to lower rates will somehow inspire people to risk it all is just insane. This is even coming from Goldman Sachs, which means nothing for qualification. The people in the elitist banking group think that power makes everything and they believe the conspiracy theories, which shows that they are drunk on their own egos. Just because you are running the central bank does not mean you are all-powerful, and the utter failure of Mario Draghi is exposing that to the world.

The ECB’s entry into the corporate bond market has shown that Draghi is becoming desperate for he is buying bonds with junk ratings. It is one thing to buy good corporate paper, but he is buying the bottom of the barrel in hopes of fending off corporate failures. Draghi has even bought notes from troubled German carmaker Volkswagen AG.

Draghi’s first corporate bond purchases indeed made an impact, but one has to wonder how this will inspire growth rather than prevent failures. The ECB publicly said it would buy bonds from companies with a single investment-grade rating. Yet, people assumed the ECB would be buying the region’s highest-rated securities.

We are witnessing how governments collapse. We have unqualified people running things who are incapable of admitting to mistake and merely accelerate the same process.