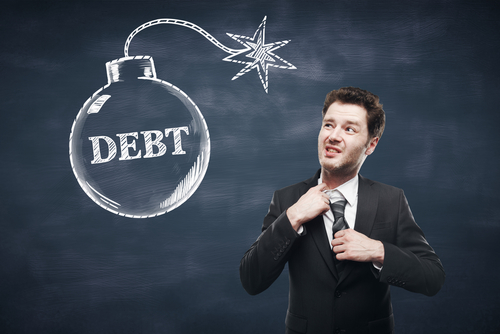 The view that BREXIT is a creating uncertainty in Europe with the swell of populism, the demand for dollar denominated debt has been strong over the past year. This has led to more debt being racked up at a faster pace than ever in US dollars among emerging markets, which stood at about 50% of the US National Debt at the start of 2016. The debt in new offerings has exploded as bears continue to say the Dow will crash giving a strong bid to debt and the dollar will crash so issue dollar debt it will depreciate is was “smart” money thought would happen. Sometime the “smart” money just gets it completely wrong. These trend in thinking and demand have led to an extraordinary offering of new dollar debt which is close to $160 billion by the 1st of May, 2017. This represents more than twice the dollar value reached by May 1st last year.

The willingness of investors to buy debt securities is rooted in these bearish forecasts for equities. I was recently asked to do an interview because they said they were desperate to find someone who was bullish on the equities market long-term. The vast majority keep touting the dollar will crash with the share market and this is fueling the explosion in new debt along with the expectation that interest rates will rise – not fall.

Investment funds specializing in emerging market bonds reported inflows of $ 1.9 billion, according to data provider EPFR Global. Also, exchange-traded funds from this sector were able to show more than $200 million. Investors from the US and Europe are currently particularly interested in corporate bonds from countries such as Brazil, Indonesia or Argentina, since they yield comparatively high returns and have rather short maturities. This is similar to the Russian bond collapse back in 1998, which took down Long-Term Capital Management.

The bond debt from developing countries is growing exponentially with total commitments reaching around $425 billion+. This crop of bonds have an average maturity of 6.3 years as compared to 10 year maturities for investment grade rated as risk-free.

This is adding to the crisis we see on the horizon and a dollar rally will set off a debt crisis like nobody has ever seen in more than 100 years. Private debt among emerging markets is almost about $1.6 trillion with maturity due to foreign creditors over the next five years. It looks like about 90% of this debt is in US dollars.