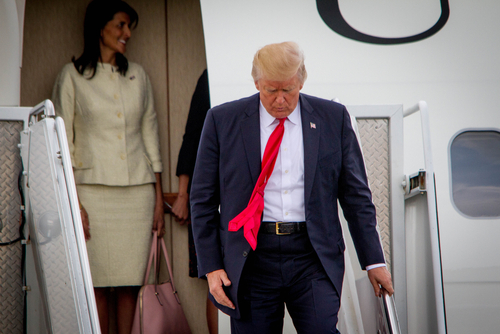 US President Donald Trump may be a good businessman, but in politics, he just does not get it. Politics is all about ego and back-stabbing. It is not about logic and the art of the deal. After just ten days in the office, Trump’s communications chief, Anthony Scaramucci has been forced to resign. The Chief of Staff John Kelly demanded a clean new start and and that meant the dismissal of Scaramucci. This last week had caused a lot of trouble, when Scaramucci attacked the now dismissed Reince Priebus and Trump’s chief Steve Bannon with vulgar words. Trump is under pressure, because he has not implemented many announced projects so far. He is kept spinning around in circles fighting things like gays in the military creating so many new wars and hatred alienating support for projects he promised like tax reform.

So far, Trump is a man who does listen, but he is also a man who is very much his own. He is out of his league in politics. This is not about the best deal for the country. This is indeed more than a swamp – it is an entire ocean of corruption and self-interest. Negotiating a business deal is a one on one arrangement with each having a self-interest. This is a multi headed beast with no possible way of confronting on so many levels simultaneously for every politicians has his own self-interest, which has nothing to do with the good of the nation. Trump has to STOP creating so many new wars and stop the personal tweeting to get even. Just get on with the tax reform before it is too late or he will find himself losing support from the people in 2018.

It has been this downturn in Trump’s administration that feeds the weakness of the dollar.