Has Merkel Been Undermined in Germany?

The German election was on par with the global trend that is rising up against the establishment as we have known it. Angela Merkel has been accused of weakening her respective coalition partner. The election result of the Bundestag election shows that not only the SPD has to worry about losing ground, but the Union of the CDU and the CSU in Bavaria has been substantially weakened.

Merkel has always created a coalition by incorporating the key program points of the other parties into the Union. However, the election saw the Union lost nearly 9%, which is a historic defeat. In addition, there is a real rift emerging now with the CSU in Bavaria, where the CSU fell below 40% for the first time. In both cases, this has been caused by the refugee issue Merkel has tried to pretend is not a crisis.

Merkel has drastically underestimated the AfD and the refugee crisis. She concentrated on the Greens and the SPD and tried to bury the other parties with extremist labels. The AfD Merkel tried desperately to paint into the Nazi corner. She has failed to understand that the refugee crisis is a real crisis and it has undermined the people’s feeling of security.

The Union and the SPD wanted to negotiate the issue of refugees and migration. The SPD under Martin Schulz even was proposing that they should be allowed to vote. Without any comprehension of how serious the refugee crisis has been, Merkel attacked even the German-Turks in the TV duel as Turkey told Turks not to vote for Merkel. Schulz raged against the German-Turks despite the fact that the Turks in Germany were not refugees and had been there for decades.  Merkel positioned the CDU to the left of the center with the SPD in her entire term of office and wanted to put the key to their long-term strategy in this election of socialism. 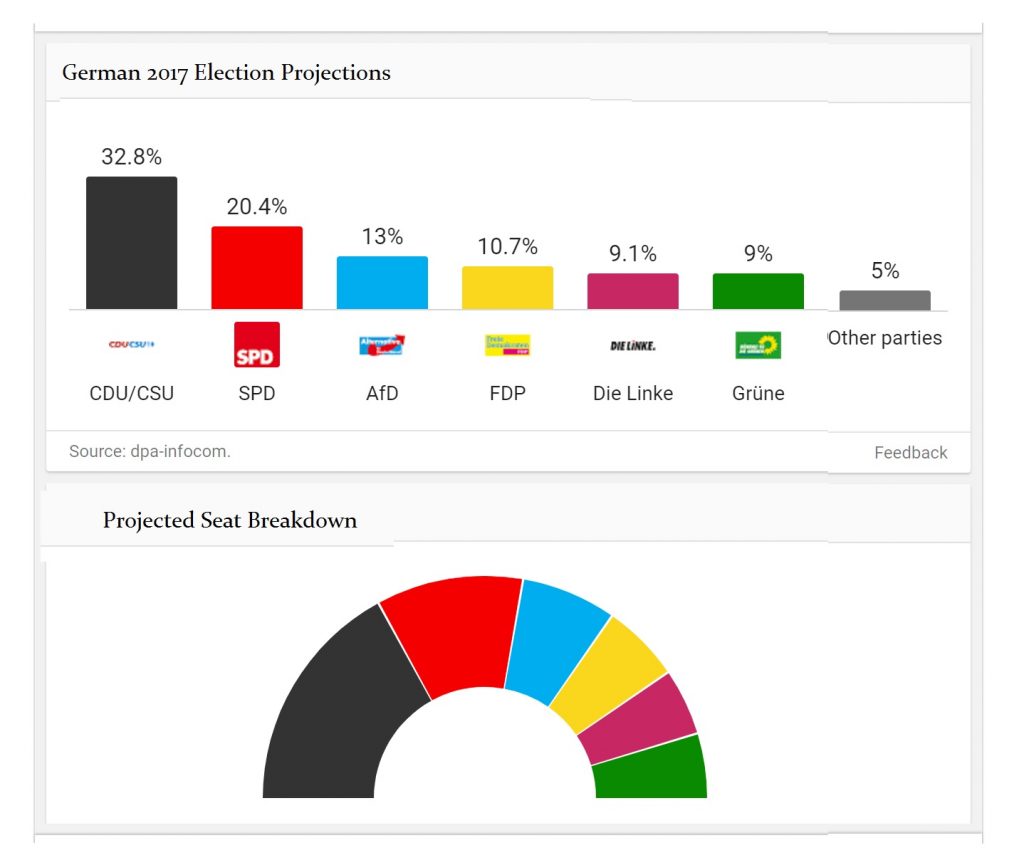 Merkel’s Grand Coalition has seem a significant vote amounting to 46.8% voting against everything she stands for. The people have elected the FDP, the Greens, or the Left Party, while the bourgeois-conservative voters have moved to AfD. The union lost a million voters to the AfD, which was remarkable. This goes to the substance of the refugee crisis.

Merkel and her Grand Coalition have tried to downplay this political disaster. While Merkel has clung to power, the CSU is demanding concessions how in light of its loss to the AfD in Bavaria. Merkel may still be in office, but she suffered a defeat that was morally decisive as was the case with Hillary Clinton.

Merkel’s CDU has been unable to prevent voters from abandoning her Grand Coalition. She has indeed not strengthen the Grand Coalition, but weakened it. With the economy turn down and the inability of the ECB to cope with the deflation, the prospects moving forward for the Grand Coalition appear to be headed for a major political collapse.

Merkel’s failed strategy of setting up a left-green-conservative Volksspartei in the center for the CDU has meant that Germany is currently almost unregulated as Merkel has tried to be the Chancellor embracing all points of view except the AfD.

Germany’s Social Democrats (SPD) were hoping to at last oppose Merkel. However, they lost 5% from the 2013 election which has reduced them to a diminish socialist party. The SPD won just 20.5% of the vote, which was the party’s worst result in the 19 general elections since the creation of the federal republic. This demonstrates what our model has been forecasting that we are in the collapsing stages of socialism.  Martin Schulz his SPD party had no choice but to go into opposition “to defend democracy against those who question it and attack it,” after dropping to a post-war low.

Talk of the SPD abandoning Merkel and joining a black-yellow-green coalition with the FDP and Greens, does not look to be promising. The opinion makers in both parties are radical opportunists but not really team players. This would produce a coalition of just 40.1% against the CDU’s 32.5%.

Merkel has clearly abandoned the conservatives, which puts tremendous pressure on the CSU in Bavria. The CSU has made it clear that they must position themselves to the AfD given the attitude in Bavaria. This position is completely incompatible in a coalition with the Greens. It is as good as incompatible with a FDP. The CSU could not possibly align with the Greens without being in complete opposition with the AfD.

Merkel’s previous political strategy has called into question coalition politics. Yet after 12 years in power, many say that Merkel would have to be dragged out by the hair. The see the CDU as too corrupted by holding power too long. The CDU has lost all vision of where the people really stand. The AfD has offered these “deplorables” as Merkel called them an alternative, because the CSU was not able to penetrate the Union.

Merkel has won the first place and she has become a chancellor for a 4th term. But because the German political parties are in ruins, the question arises whether being chancellor even matters in this environment within Germany. Some fear that Germany will go the way of the Netherlands or Spain and muddle along temporarily governed by provisional rule until a new election is unavoidable in the end. Merkel’s underestimating the Refugee Crisis may seal the fate of Germany moving forward. An those who saw the Euro defeating the dollar; well good luck. The rend is down long-term.