QUESTION: Marty; I just read Time Magazine that said the Democrats are in the worse shape since 1929. I understand you take no personal credit for all of these amazing forecasts you provide on so many topics. You have clearly shown that the world is connected and the global trend is identifiable. Can your computer also forecast that you will make a difference when it comes to push v shove?

ANSWER: Political change is driven by economics. That is fundamental. Time Magazine correctly wrote: “On the surface, the Democratic Party has been united … [b]ut dig an inch deeper and it’s clear the party is divided…” I have warned that the seeds of discontent were rising inside the Democratic Party back in February. In September 2016, I warned that: “By 2018, we just may see a completely different party forged out of the collapse of both the Democrats and Republicans we have come to know.” Trump has recast the Republican Party even though the elites are still in denial and fighting back. Trump beat all their candidates. So even the Republican think this is a fluke.

The people now handling Trump, are doing their best to steer him clear of the Deep State to protect the inner-workings. Trump is finding it very difficult to Drain the Swamp because the Press is defending the Swamp to their last gasp of air like CNN, New York Times, and the Washington Post. CNN fell below all the other news programs because of their extreme bias.

The numbers are the numbers. The computer has no personal bias. If we simply step back and look at this chart objectively, it is not hard to see why the computer has been forecasting the demise of the Democratic Party which has maintained the mantra that business is evil as are the rich. 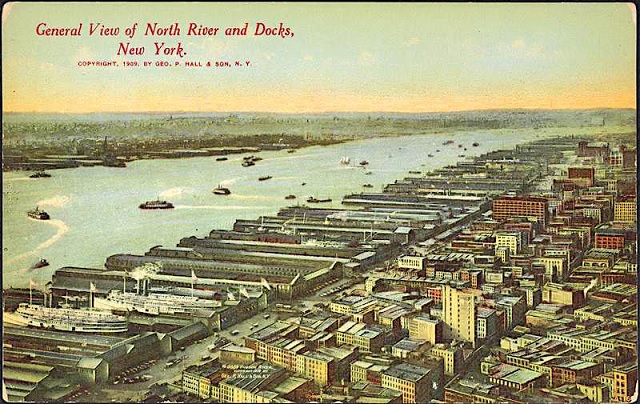 That view dominated the union movements of the 20th century and they succeeded in driving quality down and their jobs to leave by boat, train, and plane. New York use to be the biggest port in the United States. Today only a few Cruise lines sail from NYC at Pier 88/90/92 by 55th street. Here is a postcard from 1909 showing all the activity. The unions drove the shipping industry out of New York with this anti-business attitude inspired by the Democrats and Karl Marx.

Socialism is dying and taking the Democratic Party with it. Time Magazine quotes Democrat Tim Ryan is an 8 term Congressman who was even considered as a potential VP with Hillary. He is frustrated with his own party and finds the message with “its fixation on divisive issues and its ‘demonization’ of business owners” is not a message people want to hear any more.

The Democrats are living in the past and their message is not embracing anyone except those Democrats who cannot think for themselves and simply vote because they are Democrat.

This is BY NO MEANS my personal opinion. This is simply based upon the trend in motion. The left is losing around the globe for it has been a hateful agenda that always blames the rich, yet constantly reduces the standard of living for everyone the same a s Communism did while making politicians rich and the elite. This is how empires, nations, and city states collapse into the dust of history.

The Democrats with their hardcore supporters, are simply in a state of denial. The Republican elite are likewise in a state of denial and think Trump was just as passing fad. Both sides will learn the hard way – this is about them. It is time for political change.

I am not sure of the outcome for myself. I can say that the demand for access to our systems is growing unbelievably. Hopefully, if someone will just look at the global trend in motion and realize we need a change, then my job is finished.