The Economic Confidence Model & Why there are 6 waves 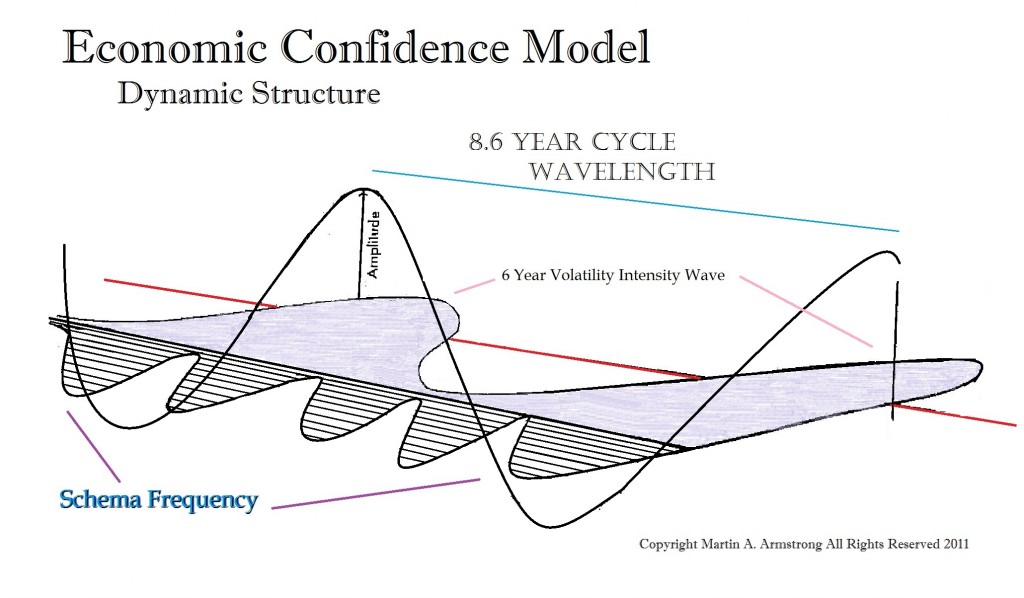 Firstly – sorry to hear about the passing of your mother.

Secondly – thank you very much for reading and answering questions.

ANSWER: The Economic Confidence Model is actually a three-dimensional wave structure. The volatility is a different frequency and that is what determines the number of 8.6-year waves for this is building in intensity. I have overlaid the Schumpeter Waves of Innovation theory of explanation. However, politically, the economy goes through major changes as well at the end of each wave. These are generally very profound changes. This is what we face with the next peak in 2032.95.

What you get at the end of these 51.6-year waves is very profound. After the 1774.95 peak, we end up with a revolution against the monarchy. The next wave peak in 1826.55 produced the Russo-Persian War, 1826-1828, Greek War of Independence, Battle of Monte Santiago between Brazil and Argentina, Mexican Constitution is formed, the Maryland Democratic Party begins creating the confrontation between the Democrats and Republicans (South v North) which sets the stage for the American Civil War in 1861, and even Thomas Jefferson and John Adams both died on the 4th of July 1826 (1826.50) marking the end of the generation of Enlightenment whereas the peak of the wave was July 19th. The next wave 1878 saw the Long Depression which was called the “Great Depression” until 1929-1932. The next wave peak of 1929,75 produced the takeover of the West by socialists. Then the next wave was 1981.35 which marked the peak in interest rates even to the day. The next one will be 2032 and this will be followed by the shift from the West to the East in economic power.