The Bubble of 1825 was Also a Contagion

Besides the speculative bubble that resulted in the Panic of 1825 involving the imaginary country of Poyais, when such a bubble unfolds, there is often a contagion. The events that led to the Panic of 1825 also resulted in the Canal Bubble, but this was rather different and quite distinct. Here there was the Loughborough Canal Navigation Co. which consistently paid the highest dividend of any canal company in England and it was the leading share at that time domestically. In 1824 its share price actually hit £5000, which was an incredible amount of money. Their share price never split and the annual dividend reached £200. Shareholders were getting paid a dividend that was MORE than what the had paid for the share, to begin with. It was not a huge float. There were only 70 shares even available. Nevertheless, there was trading in these shares that left behind price data. 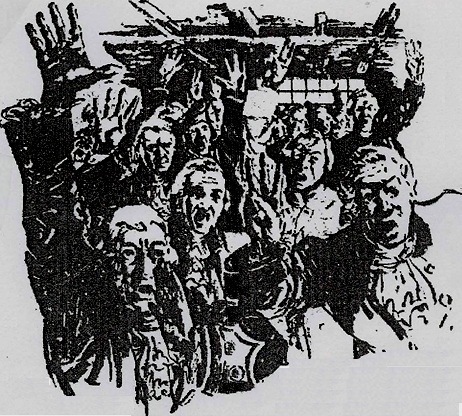 Since the Loughborough Canal was so profitable, interestingly enough there was active trading so the shares were rather liquid well into the latter 1800s. They began paying a £5 dividend in 1780, which by 1793 reached £30. It was 1793 which was the first high in the Canal Bubble, which was not alone. The early warning signed appeared even in the United States with wild speculation in the shares of the Bank of the United States create at first a Panic of 1791. The price swings from its original Loughborough Canal Navigation Co price of par 100, rose dramatically in a bidding war reaching 195 followed by a When When the Bubble burst in the Poyaisthe Panic of 1825 took place collapse back to 110 with a reaction rally to 145.

The Panic of 1792 in the United States was the first financial bubble and crisis to take place involving real estate. It was a combination of land speculation and stock speculation that resulted in William Duer (1743-1799), a lawyer from New York City who helped to draft the New York State Constitution and served as a member of the Continental Congress in 1778 and 1779, sentenced to debtor’s prison where he died. Alexander Macomb (1782-1841) was an American merchant who was one of the richest men in New York City whose home was rented to George Washington for his Presidency. He would write to a friend, William Constable (1752-1803) an international merchant trading between England and American ports. In his letter of April 1792, he lamented that he lost everything in “less than three months” and would be sent to debtor’s prison and never regain his fortune.

The real estate speculation dominated the United States whereas in England it was speculation involving land for digging canals. However, after this initial flurry into shares of canal companies which never really panned out, the Loughborough Canal Navigation Co in England was the leader, but it was very real. The shares saw wild price swings that would also result in numerous people suffering a complete loss of their wealth on speculation. The dividend reached £110 by 1818 and then soared to £200 in 1824.  The dividend was now far more than the shares originally sold for. Shares in Loughborough Canal stock, which were £100 back in 1776, had soared in value to over £300 during the Canal Bubble in 1792. However, as the dividends skyrocketed, so did the price. The share price reached £2400 in 1819 and then exploded to £5000 going into 1824.  Unlike BitCoin, this was real and not anticipation of the distant future.

When the Bubble burst in 1825 by the speculation in the imaginary country of Poyais, like the Long-Term Capital Management Panic of 1998 when Russian bonds collapsed, people needed cash. Profitable ventures such as the Loughborough Canal Navigation Co were liquidated to raise money to cover losses elsewhere. The CONTAGION was born – selling good assets to cover the losses in others. Thereafter, the price of Loughborough Canal shares continued a steady decline as the speculative atmosphere collapsed. Today, the most profitable canal probably in history is a lovely cruise for tourists.

The Myth of the Plunge Protection Team

Some Bubbles are Just Outright Frauds