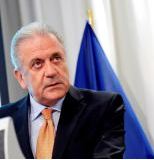 The EU migration chief, Dimitris Avramopoulos, has demonstrated that politicians are just so out of touch with reality they are securing their own demise. Avramopoulos has made a speech that Europe is set to absorb massive waves of migration “for the decades to come” and that the EU will “never become a fortress” building walls to keep people out. He delivered this speech yesterday as the Euro broke the 118 level. By this very policy, the failed invasion of the Ottoman Empire back in 1683 has been fulfilled. Christianity in Europe will eventually decline to a second-rate religion. These people are just so far from reality refusing to admit that this decision is what is tearing the EU apart, that this refusal to admit a mistake is sealing the fate of the EU and will raise the stakes of disintegration by 2020-2021.