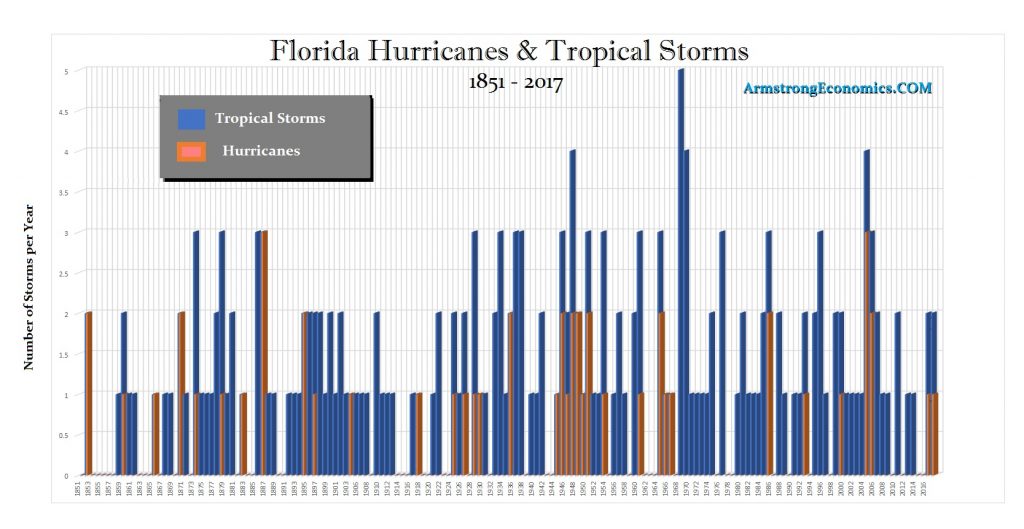 QUESTION: Mr. Armstrong; Did you run a model on Florida hurricanes before you moved there?

ANSWER: Of course. First of all, I chose Tampa area because it is the least impacted area. The local joke here is that the people say the Indian gods protect the area. This is where the Seminole Indians set up. They apparently also figured out this was the least impacted area. Nevertheless, I also ran models on tropical storms and hurricanes for Florida as a whole. The data I found went back to 1851. There have been 53 hurricanes since then into 2017. Divide that out to see what the average is and you get 3.132. Pretty close to Pi. This is just hurricanes excluding the lesser tropical storms.

If I include the 200 tropical storms since 1851 into 2017, the average comes out to about half Pi – 1.524. Then you filer it all out with volatility and intensity, as we should be going into a period of more storms per year into 2020.

There will always be earthquakes, volcanoes, storms and all sorts of disasters around the world. Most of us will not be personally injured by such events. However, knowing where they take place more commonly allows you to avoid higher probabilities. So Tampa was simply far better than Miami, which is sinking gradually anyway and the traffic is way too much. I figured I would spend 20% of the balance of my life in traffic jams. No thanks! So disclosing the risks enables us to prepare wisely. It also interesting to see nature at its cyclical best.