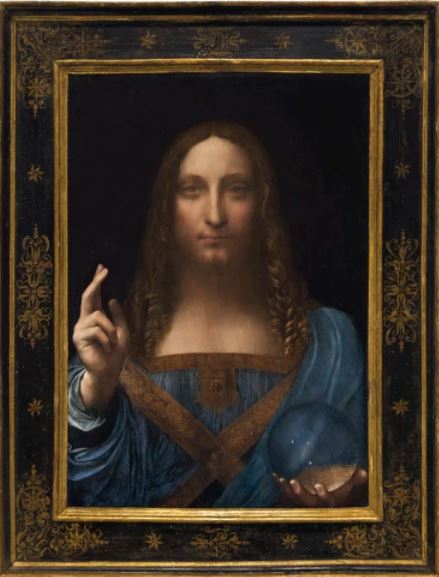 One of the more fascinating examples of how the government prosecutors are looking for high profile cases to further personal careers rather than actually policing society to protect the people has been exposed by the sale of the Leonardo DaVinci painting of Jesus Christ. I previously reported that  DaVinci’s 500-year-old painting, known as Salvator Mundi (Saviour of the World), is the only work of this artist in private hands. It was sold at Christie’s auction room in New York for a record $450 million – almost a half-billion back in November 2017.

It turns out, that the sale of this painting has ruined the theory of Federal prosecutors in New York City who actually spent more than a year building a case against a Swiss art dealer. That’s right, he was not even American. The theory was that the dealer was “improperly” putting mark-ups on the sale of dozens of masterworks to a Russian oligarch. Again, this is a sale by a Swiss dealer to a Russian. What does this have to do with New York City?

He arranged the sale of DaVinci’s Salvator Mundi for $128 million and secretly netted the dealer more than $40 million in markup profit. The prosecutors spent more than one-year interviewing witnesses and even issued grand jury subpoenas for records of the transactions. They managed to get a senior executive at Sotheby’s to help them on the theory that $128 million was overcharging for the work. The Sotheby executive was to be a witness in the case they were going to bring in New York City for criminal prosecution. Then the painting sold at auction for $450 million. Oops!

Well, so much for the “expert” at Sotheby’s who would have taken the stand and professed in his opinion a $40 million profit was outrageous and the painting was never worth $128 million. There goes “opinion” again! When it sold for $450 million, all the time and effort proved to be worthless. The prosecutors were paid by tax money to do what? Further their own careers? The dealer was Swiss and the buyer was in Russia. Just how does this even impact the United States? This is NOT the Roman Empire. A prosecutor in New York City has no such constitutional jurisdiction to police the entire world. Normally, the court would not entertain such cases. But the Southern District of New York is so steeped in corruption with its 93% conviction rate, judges have completely failed to do their constitutional duty and stop prosecutors from using the process to further their own careers.