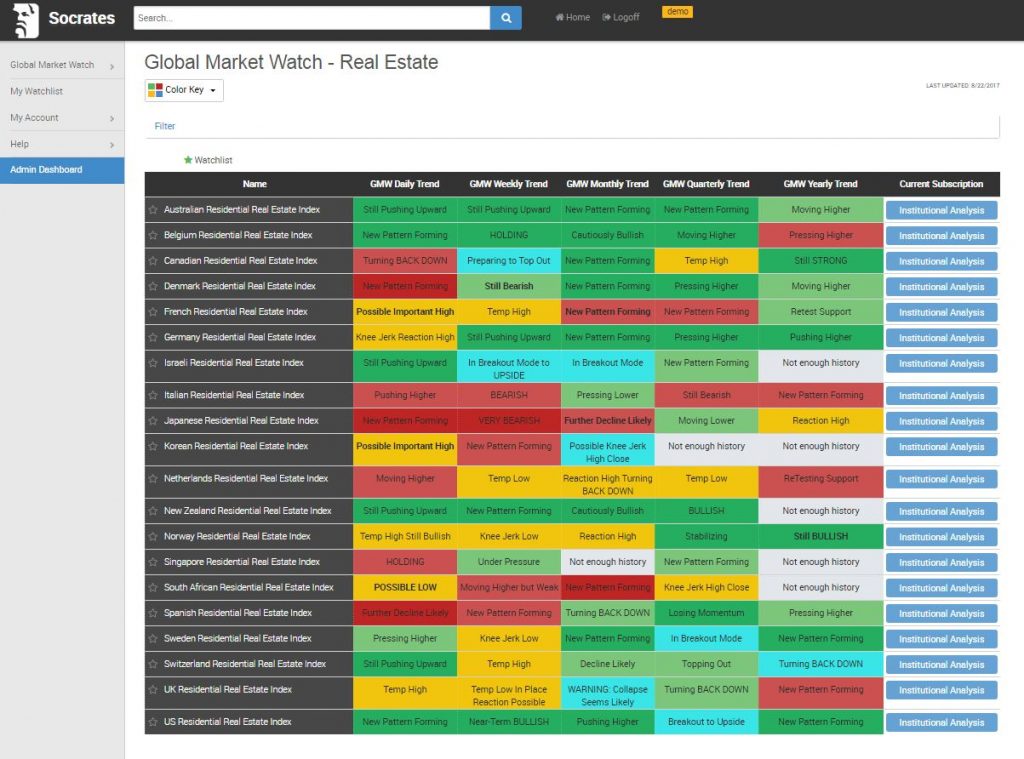 Thank you so much for what you all do.

I was just reading today’s Blog 17-08-2018 –  ‘ Real Estate – Leverage – Transition to the Reset ‘.   The bit I did not understand was where it was written  ‘ Keep in mind that as the currency declines, then the repayment cost of a mortgage declines. One the one hand, mortgages will be unavailable but those who hold the mortgage lose the most ‘

My question is when the Reset happens in which way will the mortgage holders lose the most even if the repayment cost of a mortgage declines ?  I live in the UK

thank you so much

ANSWER: Since I posted that chart from Socrates that illustrates real estate, many people have written in to ask where can they find that on Socrates. This is part of the pro version that will be released WE HOPE for the WEC this year (see Socrates Newsletter just sent out). Here are the real estate markets covered by Socrates at this time.

What I mean when I say that those who hold mortgages lose in such a situation of a decline in the purchasing power of a currency is basic. The city of Detroit suspended its payments on bonds in 1937. They resumed in 1963. Now they say they never defaulted. However, they paid back with cheaper dollars. The holder of a mortgage or a bond charges interest which is supposed to be more than the inflation rate. When inflation exceeds the interest rate, then you are paying back with cheaper dollars.

Take a life-insurance policy. If you bought one in the 1940s and it was for the huge amount of $5,000, after funeral costs of say $1,500, you left your heirs a sizable chunk of money. Today, that is nothing and will cover at best 20% of the cost of a funeral. Life-insurance is always paying back with a cheaper dollar. This is the problem in Europe. Greece, Italy, and Spain were accustomed to paying their past debts with a cheaper currency. When they converted their debts to the Euro and the Euro doubled in value, suddenly they went into deflation and cannot pay their debts and survive.

The borrower always benefits over the long-run because they are traditionally paying back with cheaper currency. If you took out a mortgage in 2007 when the pound hit 2.11 and you paid it off in 2016 when the pound was 1.18, you saved 44% in real terms of currency. This is what was behind the real estate boom that government and the vast majority of people do not understand. One of the reasons I have been blamed for creating the take over boom back in the 1980s was that I had shown some of the takeover playing how to use currency. In the case of Alan Bond who bought all the Courage Pubs back then, we were borrowing in a currency that was declining against the pound. I showed him and others how to take debt and convert it into a performing asset. They were the fun times.