QUESTION: Mr. Armstrong; Our government here in Argentina has told us we should expect more poverty and there is no hope for the future. Socrates has been amazing on its forecasts on our currency. There are enough of us down here who would sincerely ask would you consider advising Argentina to straighten out our economy and nation? You have forecast this emerging market crisis long before anyone else and your solution video on YouTube is very thought-provoking. If we can demand the government meets with you, would you do it? 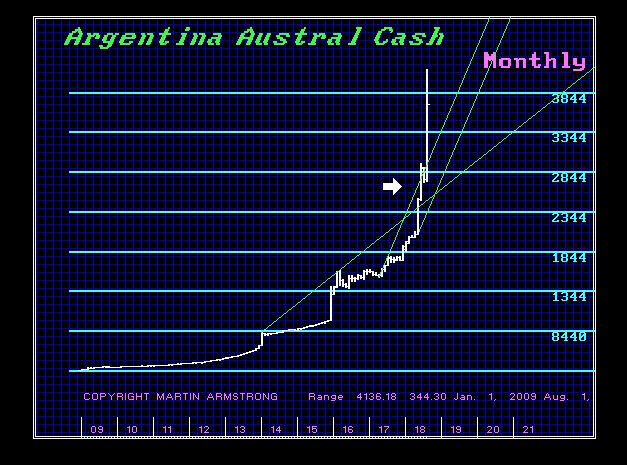 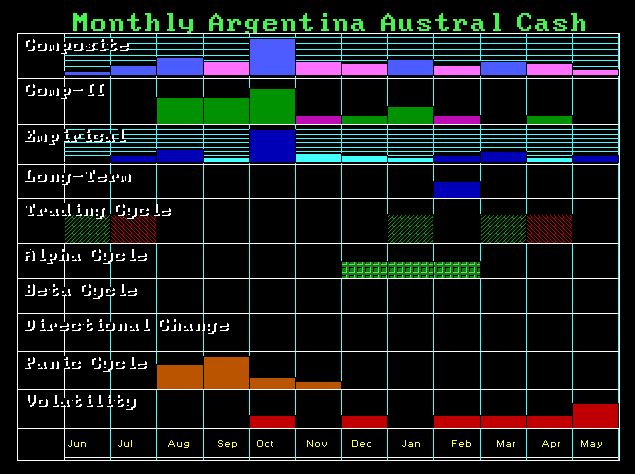 ANSWER: The song maybe Don’t Cry for Me Argentina, but it applies to the entire world for what happens in Argentina is merely the beginning of the global debt crisis. We can see from the chart that the dollar has been soaring. However, the Array picked August as the Panic Cycle and that has been spot on. Unfortunately, it does not look like this is going to calm down. We may be headed into a real Emerging Market crisis by October.

The reason why we are able to forecast such events well in advance is rather common sense. As I have said before, every solution to a crisis sets the stage for the next crisis. The Emerging Market debt crisis is unfolding because central banks in the USA and Europe lowered interest rates to “stimulate” the economy and they have no idea about how an economy truly functions. This is all based upon Keynesianism which is in turn based upon an isolated theory of the economy. They never consider that you lower interest rates and there are pensions who simply need higher rates to break-even. Then emerging markets issued debt in dollars with higher yields for the pension funds bought it assuming there was no currency risk. Now we have Portuguese and Spanish banks who would not lend to their domestic economies for there were way too many nonperforming loans so they ran and bought Turkish debt. 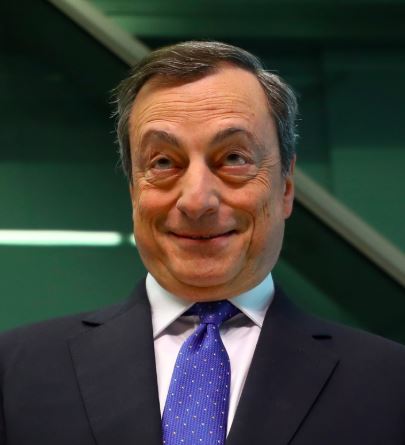 What began in Argentina and Turkey has snowballed into a broader collapse complete confidence in Emerging Market debt and the pension funds stopped buying and simply are now trying to get out as fast as they can. Currently, officials in Indonesia, India, South Africa, and Brazil are scrambling to protect their economies. The debt party is over! The ECB has created a global nightmare for so many European institutions ran into emerging markets because the ECB maintained NEGATIVE rates.

Draghi has created a global debt crisis and now he himself is trapped. This is why Italy now wants to change the structure of the ECB so they can buy member debt directly rather than in the secondary market which they have destroyed. Draghi cannot stop Quantitative Easing for the 28 member states will be unable to sell their new-issue debt at rates that are similar to the current levels. Rates will soar in Europe if Draghi actually stopped buying and then we will see a global debt crisis you cannot imagine.

Left unchecked, more nations are going to be swept up in this debt crisis as their bond values collapse. This is threatening the entire world’s economic growth and confidence. As institutions begin to wise up for once, we will see the confidence in public debt collapse. This will become a game of musical chairs and the one left standing with government debt will lose everything!

The Turkish lira, which has been relentlessly setting new all-time lows, has been creating the debt contagion. Rumors are that Erdogan is such a tyrant, he will sooner turn to Russia and default on all Turkish debt just to retain personal power. Institutional Traders are the first to worry about countries with large current account deficits and a large stock of dollar-denominated debt in a world with rising interest rates and a stronger dollar. But their management often lags and do not listen to their trading desks because they tend to be more politically correct. The phones were actually ringing at the top and it was the ECB telling the banks to stop buying dollars because they were making the dollar rally. You can play those games only for so long before the whole house of cards comes crashing down.

I would be glad to fly to Argentina to help if the pain reaches their eyeballs so they will do as directed to save the country. Half-ass maybe’s are a waste of time. It is only worth it when they realize they have no choice. The choice is plain – the people v bondholders! We are at the end of a period of public confidence in government borrowing that never ends.