Karl Marx’s Grave Vandalized – Is this the Cyclical Turning Point from the 1848 Revolutions? 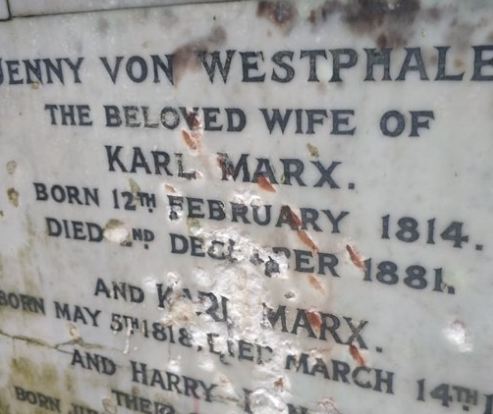 Karl Marx’s grave was selectively vandalized. Someone used a hammer to deface the monument. No other graves were attacked so it is clear this was a politically motivated incident in line with the rising economic tensions between the left and the right. The tomb of Karl Marx is located in London’s Highgate Cemetery. Marx had been exiled from Germany and then the rest of continental Europe following the failed Revolutions of 1848, which engulfed most of Europe.

Marx did his research in London. This is his pass to the British Library. The Revolutions of 1848 were essentially a democratic movement and an uprising against the political elite. In 1848, Karl Marx published “The Communist Manifesto” with Friedrich Engels, and was exiled to London as a result. In London, where he lived the remainder of his life, he wrote the first volume of “Das Kapital.” This undoubtedly influenced the revolutions that opened the door to communism/socialism. This also inspired the collapse of the old feudal structures and created independent national states. The revolutionary wave began in France in February 1848, when the French monarchy was overthrown. Communism actually began in France as a “commune” where people lived in one shared community with no individual property rights. It was the French who convinced Marx that communism would work better than just socialism, which he had advocated initially.

This 1848 Revolution spread like a contagion, similar to what the American Revolution had done during the previous century. The contagion of 1848 spread to most of Europe and parts of Latin America. In total, it impacted over 50 countries. This was by no means a cooperation between various revolutionary trends around Europe.

Generally, a contagion is attributed to six factors:

Many believe that the Yellow Vest Movement is unfolding in the very same spirit, and it too has spread like a contagion. Ironically, the cycle of civil unrest based upon economics discontent should rise in 2020. Indeed, the Yellow Vest movement appears to be right on schedule.