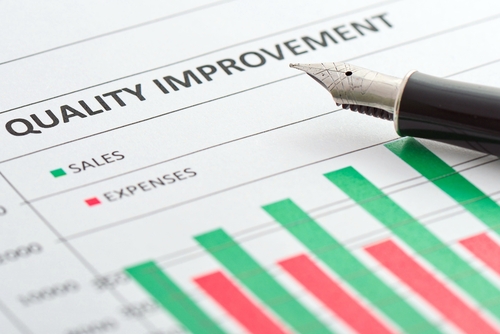 Wanted to ask you if you are noticing the same thing as me regarding the ‘quality’ of goods and services these days and if this is history repeating itself again, such as the fall of the Roman empire?

Rents are expensive but landlords treat you like your scum, not to mention insurance companies.

Car registration is expensive and yet the quality of our roads is terrible.

Economists often say competition is good but they don’t seem to recognize how the quality of our produced goods and services is suffering a result.

I delivered some building materials to a client one day and he proceeded to tell me how he had a fancy door made and shipped from China for less than $1700, but that to have the same door made locally, he was quoted $6400. I proceeded to then tell him, that is ok for you as you have saved money, but are you aware that every time we buy stuff from China, China’s mountain of Australian dollars gets bigger and bigger, and the only place they can spend those Australian dollars is back here in Australia, and so is it any wonder that Chinese investors are buying up our real estate? The mans’ face went WHITE!!!

Are you noticing the same thing and are you able to draw a parallel between now and other historical times?

ANSWER: Both the quality of goods and services declined during the 2nd century (post-180 AD), and society began to decline overall even morally. An interesting view is that of an outsider looking in. The author of this interesting quote is the famous 10th-century Arab geographer and historian Abu al-Hasan al-Mas’udi (c. 896–956AD) of Baghdad. He reflected upon what unfolded in Europe, expressing the grim reality in the early Middle Ages through a foreigner’s eyes. In outlining the peoples of the world for his contemporaries, an Arab geographer of the day described Europeans as having “large bodies, gross natures, harsh manners, and dull intellects . . . those who live farthest north are particularly stupid, gross and brutish.” He described the fall of Rome, and in describing western civilization, he effectively used similar concepts that the classical historians like Herodotus and Tacitus had once used to describe the barbarian world outside of European civilization. 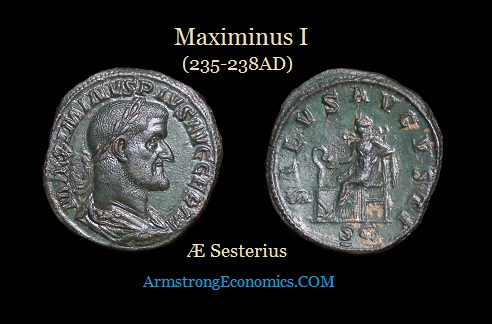 The sequence of events leading up to such drastic changes begins with high taxes and hunting the rich as we are witnessing today. Maximinus I declared all private wealth belonged to the States which was just one more step to the left from Bernie Sanders, Elizabeth Warren, and AOC. Once you do that, the result is the hoarding of wealth and that ends up contracting investment creating an economic death spiral. Education declines and regulation rises as the government seeks more power. The overall trend creates a precipitous drop in quality of life, and all the very reasons for the rise of civilization are then reversed and the trend moves from concentration to separation. This is the overall general scheme as to the reasons why Rome fell.

Keep in mind that the Dark Ages were about 600 years. So we need not worry about this complete collapse in our lifetime. Nevertheless, we are experiencing the early stages of the decline and fall of Western Civilization. The government pensions will create the same trend of fragmentation and turning government employees against the people. We will see the split of the European Union and the same in Canada as well as Australia. The United States will also split as some regions will reject the socialist regions and their attempts to subjugate their beliefs to their own.

If Rome’s sheer size made it difficult to govern because centralized government always fails. This contributed to the ineffective and inconsistent leadership which only served to magnify the problem as we are witnessing today as politics also has become highly polarized. Being the Roman emperor became a highly risky position during the 2nd and 3rd centuries. Civil war became commonplace as people made attempts to take power or to separate. This would thrust the empire into chaos, which we will begin to experience after 2020. The Praetorian Guard—the emperor’s personal bodyguards—assassinated and installed new sovereigns at will, and once even auctioned the spot off to the highest bidder who was Didius Julianus (193AD). There were two rival bidders but Julianus won paying 25,000 sestertii per man, which was the high bid and he was duly declared Emperor. However, the Praetorians were not loyal to him and he was beheaded on June 2nd after a reign of only 66 days. 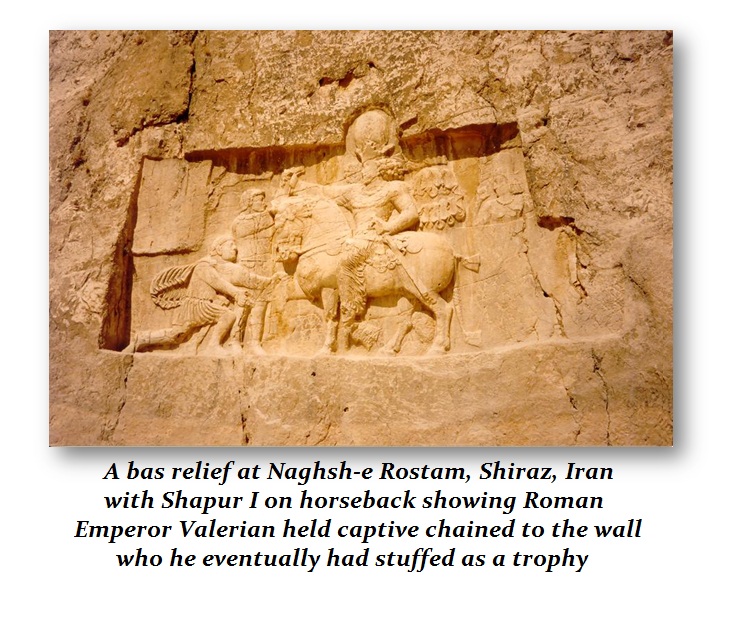 The Praetorian Guard became the same as we have today with the Deep State, illustrated in the FBI, CIA, and NSA all conspiring to overthrow Trump. This political chaos also extended to the Roman Senate as it has currently in modern times. The Senate became a cesspool of corruption that failed to temper the excesses of the emperors due to its own widespread corruption and incompetence (i.e. gridlock). As the situation worsened, civic pride waned and many Roman citizens lost trust in their leadership. Trajan Decius (249-251AD) was the first Roman Emperor to be killed in battle with the Barbarians. That had a great impact on the confidence of the people in government. They suddenly saw themselves as vulnerable. Then, in 260 AD, the Roman Emperor Valerian I (253-260AD) was captured and kept as a slave to the Persian king. That was the final straw, and we see the collapse of the Roman Monetary System within 8.6 years. 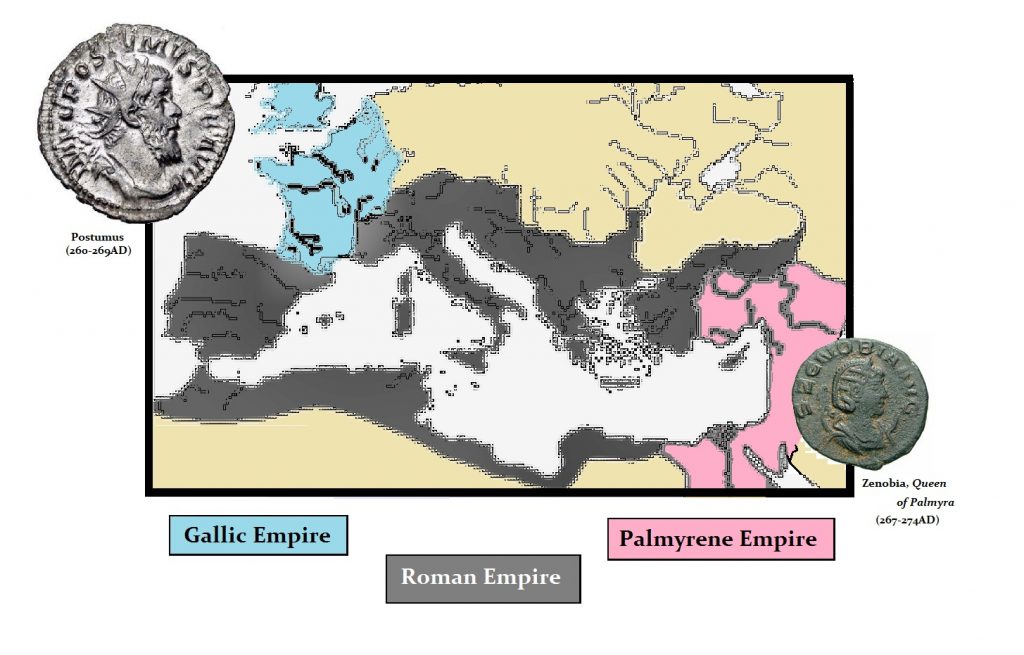 The Barbarian attacks on Rome partially stemmed from a mass migration caused by the Huns’ invasion of Europe in the late fourth century. As the Huns moved West, the barbarians were compelled to invade. Once they saw that Rome was vulnerable following the capture of Valerian, the invasions began in mass. This led to the Roman Empire dividing into three regions. Postumus (260-268 AD) led the rebellion creating the Gaulic Empire (Britain-France-Spain) and in the East Zenobia carved out her Empire based in Syria.

We are simply following the very same pattern in the same order. History repeats simply because human nature never changes. We would always like to think we are smarter and different. That has never proven to be anything more than a preferred delusion.