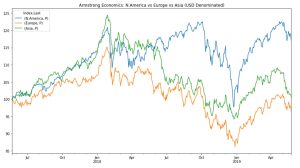 COMMENT: Mr Armstrong, I want to thank you for I listened to the forecasts of analysts who said Europe and Emerging Markets were the best places to invest because the US was overpriced and would crash. I was introduced to you by a friend. I listened. I cut my losses and switched to the domestic market. Your analysis saved my future.

I cannot thank you enough. 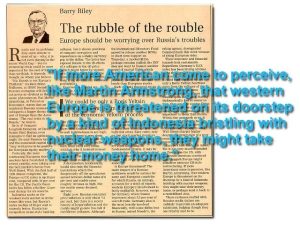 REPLY: I was a hedge fund manager. I used to manage a fund for Deutsche Bank (Track Record). The reason analysis is so bad is because of regulation. We have the SEC & CFTC and the regulations between them are incompatible. You could never have a fund domestically where you would actually hire a fund manager who made that decision for you. Because of the regulation, you had fragmentation. Funds that sold Munis, other tech, others IPOs, high growth, etc., etc. etc. There was no domestic fund that would make those decisions for you because there was no single entity that served as the regulator as is the case outside the United States. Too many chiefs and no Indians, as they say.

The offshore hedge fund began, not a real hedge, but as a fund where the manager made the decision and could invest in anything. Today, hedge funds have lost their way. The idea that they would offer an alternative strategy that would move opposite to standard funds was really a sales job. Often, hedge funds have not performed because of biased domestic views. That was NEVER the way I managed the fund. I was named “Hedge Fund Manager of the Year” back in 1998 because my strategy was to make that decision on a global scale of what to be in and out of. I was not trying to lose money deliberately as a hedge when the market rallied and I saw its mirror image. I never got that idea of a hedge fund nonsense. My job was to pick the winners on a global scale and avoid the danger areas like Russian back in 1998.

If we look at the world in REAL VALUE terms, that means we MUST look at everything filtered through currency. Here is our index of the world. We take Europe and Asia, combine the indices and then replot them in dollars. This clearly shows that we ABSOLUTELY MUST include currency into the analysis. We can see that the US share market has dramatically outperformed everything else in the world.

I had to always consider geopolitical risks. Knowing when there was a risk of war or political uprising was important. Understanding the trends in weather was critical, as was evident from the Great Depression. Even keeping an eye on earthquakes and correlating that to the global economy was also obvious from hist – e.g. the 1923 Japan Earthquake and the 1906 San Francisco Earthquake that eventually contributed to the creation of the Federal Reserve. The realization that the world economy was dynamic meant we had to respect the various different influences each factor played in the outcome of the whole. 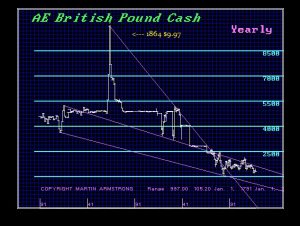 Yet, none of this would be possible without also considering capital flows and currency movements. The currency became the means for capital to vote on a global scale as to who it trusted and who it did not. Here we can see that the British pound reached $9.97 in 1864 against the dollar. It fell to $1.03 in 1985. The trend of the currency cannot be ignored. 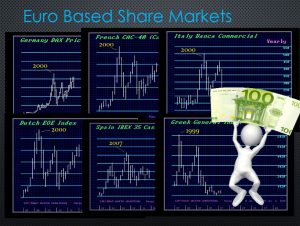 Here are the share markets based in euros. All peaked in 1999 to 2000, except Spain which entered the euro late. How any analyst could recommend Europe two years ago was just nuts. This demonstrates that they do not understand international capital flows or the importance of the currency in making such forecasts. 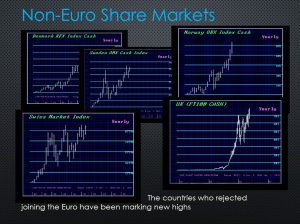 Now, look at the European share markets that are NOT in the Eurozone. They have all made record highs. The difference has been the currency and regulations pouring out of Brussels with self-interest in maintaining the European Project, even though it has failed.

This is not my opinion v everyone else. This is simply looking at the facts, not propaganda, and letting the fact lead to the conclusion.