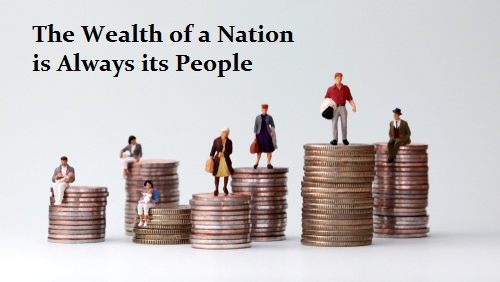 QUESTION: Dear Martin,
Whereas for years you have put in a solid 5,000 year data for arguing for no individual taxes yet in countries around the Middle East there is no income tax. Yet they have not made any dynamic economic progress as such. I mean the evidence is seen by us live. How do we argue that zero direct individual tax will bring more economic growth? What am I missing?
Regards,
KG

ANSWER: It is not just taxation. The wealth of a nation is not its resources, but its people. The Middle East has been blessed with oil in many areas. As a result, the emphasis has been historically on a mercantilist model of just selling things to others. If you look closely at the economic model, you will see that Germany may be the strongest economy in Europe, but the wealth of its people is actually less than Italy’s. According to the German Bundesbank, the European reports show a median wealth of around €163,400  in Italy vs. €51,400 for Germans. Germans pay a lot more in taxes than Italians where they make it an art form to avoid taxes.

China understands this model. This is why they are turning inward to develop their domestic economy. A consumer-based economy creates jobs and provides a stronger economy. This is why the USA has the largest economy and everyone else stands in line to sell things to American consumers.

Economies are constructed on their people — not resources. You need education and a work ethic to succeed. Commodity-based economies that rely on exports lack the sustainability long-term. The Middle East realizes this and we are witnessing a change in places like the UAE and Saudi Arabia.