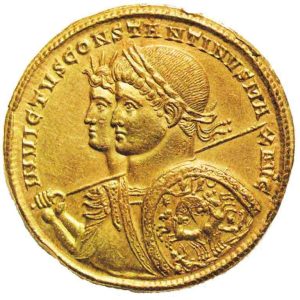 QUESTION: Why Constantine the Great?

Of the 170 or so Roman emperors from 27BC to 476AD only one carries the title “the Great” and that is Constantine(r.306-337AD).
Would you have chosen another Roman emperor for this distinction in preference to Constantine? 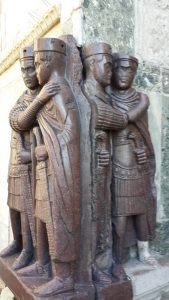 ANSWER: Constantine was given the title “the Great” because of his use of Christianity as his means to power. His mother Helena was a devout Christian. However, Constantine did not accept baptism until he was on his deathbed. He claimed that he had a vision where God showed him the sign of the cross and to put that on the shields of his army when they were outnumbered 2 to 1. It was a great tale. The truth was that the opposing army was mostly Christian and it was a great strategy. This gold medallion shows Constantine with the sun god Sol.

Constantine used Sol because he began to emerge as the supreme pagan god known as Sol Invictus (invincible sun which appeared every day). There was a tetrarchy set up by Diocletian (284-305 AD) where there were two emperors and two vice presidents, so to speak, named Caesars. Constantine used Sol and then Jesus Christ to justify his civil war in both instances by saying there was but one god above and there should be but one emperor on earth.

As far as who I would say was truly the best emperor, it would have been Marcus Aurelius (161-180 AD). You must understand that the title “the Great” or “Magnus” was often used for those who waged major wars and won. It did not mean that they did some magnanimous act. Pompey (106-38BC) was called “Magnus” for his victory in the civil war and not for his humanity. His success as a military commander in Sulla’s second civil war resulted in Sulla bestowing the cognomen Magnus, “the Great,” upon him.