What Happens When the Financial Capital of the World Moves? 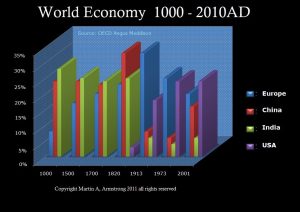 Knowing that the financial capital will likely move to China after 2032, since that would be the peak of the public wave, where will someone in the US put their capital? 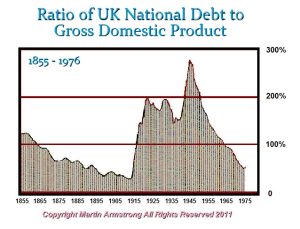 ANSWER: Britain was the Financial Capital of the World until World War I. This chart illustrates what happened to Britain and how it lost that stature of being the Financial Capital of the World — it was debt. The people in Britain did not lose everything. What really happened was that the separatist movement emerged and the British Empire began to break up. 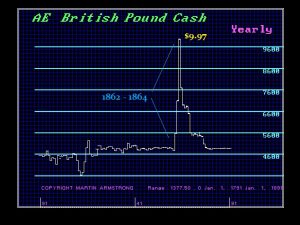 Look at the British pound during the American Civil War. It was the rally in the pound that began the breakup of the British Empire, as I have warned will happen to the US dollar. That rise in the pound exported DEFLATION to the British Empire and the economic conditions led to the start of separatist movements. Canada won its independence on July 1, 1867. The second major wave of separatist movements came with the end of World War II. India won its independence on August 15, 1947.

The United States will be at risk of also breaking apart under economic conditions, which will fuel both the religious and political battles between left and right. There will be a high probability that the United States will break into regional groups, probably four major regions in general. It does not mean life will come to an end or that we all have to run and hide in a cave. The British survived as will Americans. If we understand the cycle, we will be better positioned to survive with security.

When is Printing Money Deflationary rather than Inflationary

Can Rates Rise with Deflation?

Nonperforming Loans in European Banks 10x that of U.S. Banks