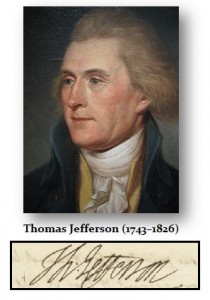 There are only a handful of people throughout history who I admire and wish I could have shaken their hand. Thomas Jefferson was one of them. The Fourth of July is all about the signing of the Declaration of Independence which Jefferson authored. 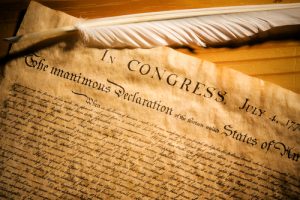 We hold these truths to be self-evident, that all men are created equal, that they are endowed by their Creator with certain unalienable Rights, that among these are Life, Liberty and the pursuit of Happiness.–That to secure these rights, Governments are instituted among Men, deriving their just powers from the consent of the governed, –That whenever any Form of Government becomes destructive of these ends, it is the Right of the People to alter or to abolish it, and to institute new Government, laying its foundation on such principles and organizing its powers in such form, as to them shall seem most likely to effect their Safety and Happiness. 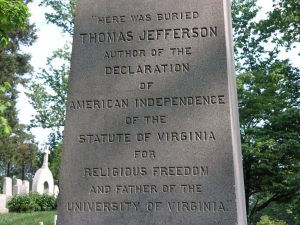 The actual Independence Day was expected to be July 2, when the Second Continental Congress voted to approve a resolution declaring the United States independent from Great Britain’s rule. After voting for independence, Congress debated and revised the wording of the Declaration which took two days to complete on July 4th. Jefferson had been writing it, draft after draft. He was one of the Committee of Five the Continental Congress set up to draft a declaration, with the other four being Adams, Benjamin Franklin, Robert Livingston, and Roger Sherman. John Adams had written to his wife, Abigail, stating that July 2nd would be the day of Independence.

It wasn’t until July 8 when the city of Philadelphia actually held a parade firing off guns to mark the moment. Then it wasn’t until July 9th when the Continental Army, under General George Washington, received the news. Washington then ordered soldiers who were in New York City to defend it from the British. Washington read a letter dated July 6th that he received from John Hancock, who was the president of the Continental Congress. As far as the British were concerned, they did not learn of the Declaration of Independence until August.

Thomas Jefferson wrote his own epitaph. He was proud to have done the Declaration of Independence. He made no mention of being the President of the United States.

In truth, nobody signed the Declaration of Independence on July 4th. John Trumbull’s painting of the signing hanging in the grand Rotunda of the U.S. Capitol was simply a work of imagination. The actual signing took place on August 2nd. That’s when the assistant to the secretary of Congress, Timothy Matlack, produced a clean copy. John Hancock signed first, right in the middle of the signature area. The last delegate to sign, according to the National Archives, is believed to be Thomas McKean of Delaware, who signed sometime in 1777.

According to the National Archives, there are 26 copies of what is known as “the Dunlap broadside” (21 owned by American institutions, two by British institutions, and three by individuals). These were printed on paper on the night of July 4th by printer John Dunlap from a document sent by the Continental Congress. The original was written on parchment. There is one line of text along the bottom edge on the back of the copies of the Declaration of Independence. It reads, “Original Declaration of Independence dated 4th July 1776,” This docket (identifying label) was visible when the document was rolled up for storage.