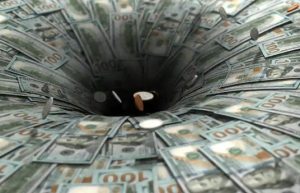 We are facing a serious collapse in government that appears to be shaping up on the horizon beginning 2021/2022. Take the city of Chicago for example. The city is buried under a mountain of city employee pension debt and it’s impossible to see how their city could possibly survive. There will be a major financial collapse because those in power are also involved in the very same pension scheme so they have no incentive to do what is required to save Chicago — implement major structural reforms.

The total amount of city, county, and state retirement debt Chicagoans are on the hook for amounts to $150 billion, according to Moody’s most recent pension data. If we look at the city’s one million plus households, that means that each household is on the hook for nearly $145,000 to cover government employee pensions. They can forget their own pensions. One-fifth of Chicagoans live in poverty and nearly half of all Chicago households make less than $50,000 a year. There is no possible way to raise taxes to cover these obligations.

Naturally, the politicians want to hunt the rich. If we then look at the households that earn $200,000 and just tax the “rich” we end up with $2 million in obligation per household. We cannot expect government officials to save the day when they too have personal pensions at stake. This story is being repeated around the nation and in Europe. Nobody is willing to address the problem because they have personal pensions on the line.