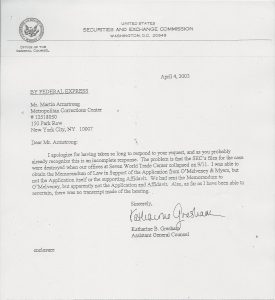 QUESTION: What is your view on the new demands for an investigation that there is “overwhelming evidence” that the buildings were brought down by explosives?

ANSWER: I do not know about the Twin Towers, but I can say that the first World Trade Center bombers drew the World Trade Center on the wall of their cell in MCC with planes flying into it. There is no question that there was a terrorist attack. HOWEVER !!!!!!!! There is evidence, I know PERSONALLY, that the government knew what they were going to do. Do not confuse the fact that there were planted explosives to try to pretend there was not a terrorist attack. They just used the attack as cover.

I focus on building 7, which was never hit by any plane, yet it fell like a pancake and that was indicative of explosives. Curiously, the SEC was there and this is where they kept the evidence for court cases. Gun possession cases should have been dismissed but the prosecutors then showed photos of guns. The joke was that they used the same photo for everyone. Judges just accepted it and pronounced, “Take him away.” That is not the way the law is supposed to work.

I had tapes that would have put the whole New York banker crew in prison if we had a real government. There were tapes covering every manipulation they pulled off from rhodium to platinum and silver. It was the platinum manipulation that I had a tape of where they admitted to bribing to a Russian minister to “recall” their platinum to take an inventory. They forced platinum to rally, then the Russian minister announced they found “more” platinum to ensure the price would crash after they flipped their positions. Even Ford Motor Company was looking into suing over that manipulation.

All the evidence I had documenting each player and what they did was seized and vanished. My requests for documents were never honored. One is supposed to be entitled to discovery. There is no rule of law. You cannot win against the bankers. When I asked a New York lawyer why the bankers are never prosecuted, he smiles and laughed. His response: “You don’t shit where you eat!”

We will never have a secure financial market until someone is ready to clean up the corruption in New York City.

There is no question that 9/11 was the event that destroyed the constitution. We lost all of our privacy and rights ever since.