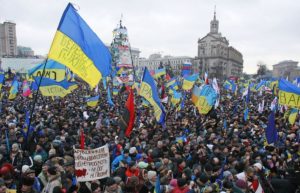 The attribution to the CIA orchestrating the Ukrainian Revolution against Yanukovich is total BS!!!!!!!!! I had personal friends on the barricades at Maidan when the protests began on the 21st of November 2013. I was advising the people I knew that they had to get the police to switch sides. A personal friend had the guts to go up to a Russian soldier when they entered Eastern Ukraine before the news. She went up to him and asked if she could take a photo since they were there to protect them. He allowed her to take the photo. I posted it but cut her image out for obvious reasons. I posted her photo on May 22, 2014.

I had firsthand knowledge of how this event unfolded and it was NOT organized by the CIA. We even had two staff members there in Ukraine. When they would visit the USA and saw any policeman, they would panic and try to avoid them because the police pre-revolution would abuse the people and even rape women. I explained that for the revolution to win, they had to get the police to switch sides.

Yes, the CIA gained influence and picked who would take charge but they did not get the people to rise up — they did that on their own. They threatened the people and warned that if they overthrew the new hand-picked leaders that they would be on their own. You MUST draw a line between what the people did and what the West did afterward. These people who attribute everything to an all-powerful CIA plot have NO personal knowledge of anything and spin their opinion as if it were fact. The whole “Fuck the EU!” comment by Victoria Nuland phoning with Geoffrey Pyatt was reported February 7th, 2014 and it only illustrates that there were efforts to gain control of the situation in Ukraine, but it does not demonstrate that the CIA organized the revolution from the start. Yanukovych fled Ukraine on February 22, 2014, just about 3 months from the beginning of the protests.

Yanukovych was an oligarch and his police were shaking down businesses and forcing them to pay his two sons. He was running Ukraine the same way oligarchs ran Russia. You obey their commands or you die. If you had a business that was really doing well, Yanukovych and his sons would confiscate it. That is what caused the people to rise up, it was nothing the CIA managed to do. I had personal friends on the barricades. I was deeply concerned for their safety and was in regular contact offering my advice.