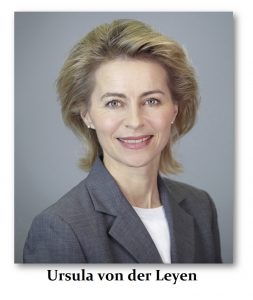 COMMENT: Mr. Armstrong, Rome was my first WEC. It was truly an eye-opening event. Nigel Farage was correct – you are the alternative to Davos. I wanted to say after you explained the structure of the European Union and there the German people were denied any right to vote to join the euro, this coronation of the new grandmaster of the European Union Ursula von der Leyen was utterly undemocratic. We never have a right to vote for the head of Europe. Americans complain about Trump, but at least he was elected. Leyen was never elected by the people and this is very dangerous for this institution need never answer to the people.

RESPONSE: You are absolutely correct. They can hold impeachment proceedings against Trump but the head of the EU does not have to face the people in any election. This is a real problem. The European Commission is simply an echo chamber. They all see the world only through their own eyes and need not be held accountable to the people. Draghi imposed more than 10 years of insane interest rates that have wiped out pensions and destroyed the dreams of the elderly. Then they appoint the head of the IMF who was a lawyer and also does not stand for election EVER!!!