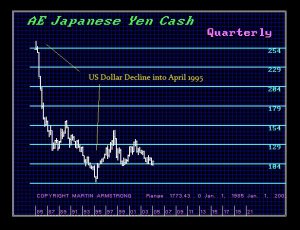 QUESTION: Hi Marty, I come from a golfing family and remember very well the shock when a Japanese investment group bought the Pebble Beach Golf Links, in 1990, for $850 million. The previous October Japanese investors bought the Rockefeller Center, triggering a flurry of Japanese purchases of signature U.S. properties such as Pebble Beach.

Was all this investment caused by The Plaza Accord in 1985, which devalued the USD by 40 percent? Which, as you’ve pointed out, also devalued American assets held by Japanese, igniting a sell-off of American investments and the 1987 crash. With cash repatriated back to Japan, the capital inflows into Japan ran the Nikkei up to its peak, in 1989. Within this late-80s early-90s timeframe, this is when the Japanese made their global malinvestments such as Pebble Beach, which they sold just two years later, in 1992, for $500 million, taking a 42 percent loss. Do I have the correlations and causations correct?

ANSWER: Yes. The Japanese bought US assets at the peak of their markets in 1989. As you can see, the dollar against the yen kept falling into April 1995. Not only did the Japanese lose money on US assets, but they also lost, even more, when they sold them and converted it back to yen on the decline in the dollar.

Currency is EVERYTHING. It dramatically alters the capital flows and can destroy economies because people remain clueless about how foreign exchange markets even function. That should be no surprise since they still teach all the economic theories of the Bretton Woods fixed exchange rate era including Keynesianism.

That is why everyone in the field is self-taught. You cannot get a degree in hedge fund management. Christine Lagarde of the IMF and soon to be head of the European Central Bank is a lawyer with no experience in funds management. People run for president spouting economic promises without the slightest background even in economics. What they teach in school has become ever more irrelevant in the real world. Other than a doctor or lawyer, it is hard to find someone who is working in the field in which they obtained a degree.

When the Money Dies

Japan’s Monetary System is a Warning to Modern Society

BOJ Trapped – How will the Nightmare End?