AOC: Stop Reproducing – Save the World

Stop Reproducing – Save the World 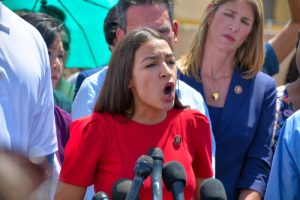 Let’s prevent climate change, a naturally occurring cyclical phenomenon, by not having families. The proposition sounds like a dystopian nightmare out of Orwell’s “1984,” but it’s now the latest suggestion of “progressive” NY Democrat Alexandria Ocasio-Cortez.

“Our planet is going to hit disaster if we don’t turn this ship around and so it’s basically like, there’s a scientific consensus that the lives of children are going to be very difficult. And it does lead, I think, young people to have a legitimate question, you know, “Is it okay to still have children?’” AOC actually said aloud in front of reporters.

The factual “scientific consensus” declares climate change to be a completely normal, naturally occurring event. Worsening matters, the CDC reported that birth rate levels in the U.S. are at an all-time low.

Countries such as Japan and China are begging their citizens to reproduce and create a future workforce. Here in the U.S., our dreadfully misinformed politicians have the audacity to ask citizens to stop reproducing altogether. Propositioning climate change as an ethical dilemma is a new low for politicians, proving that they will do anything for votes and taxes.

The family dynamic has already been destroyed by politicians. It is no longer possible for most mothers to stay at home as two incomes are needed to pay for living expenses. Children leave home earlier and move out to the cities in search of employment. Before they even enter the workforce, most young people are buried in student debt that they can never repay even in the event of bankruptcy thanks to the Clintons repealing Glass-Stegall. Millennials can barely afford to buy homes, marry, or have children. The elderly must rely on a failing medical system for support instead of their families. How much longer will we allow politicians to destroy our quality of life? The real ethical dilemma facing future generations lies in the unprecedented powers of politicians who are willing to destroy our future for their own self-interests.

Let’s hope she does not reproduce.

We Have Only 12 Years to Live – Are they using the ECM?

Is the Gang of Four Trying to Start Race Wars?