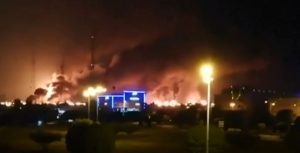 Saudi Arabia has been attacked by Iran or pro-Iran forces with the target being their capacity to produce oil. Saudi Arabia has admitted that its oil and gas production following drone attacks on two major oil facilities run by state-owned company Aramco will be reduced by as much as 50%. The Energy Minister said the strikes had reduced crude oil production by 5.7m barrels a day – about half the kingdom’s output. 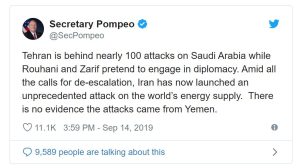 A Yemeni Houthi rebel spokesman said it had deployed 10 drones in the attacks. However, US Secretary of State Mike Pompeo blamed the attacks on Iran saying there was no evidence they came from Yemen. Pompeo further described the attack as “an unprecedented attack on the world’s energy supply”.This certainly will justify military action against Iran as the Middle East heats up despite the global cooling.