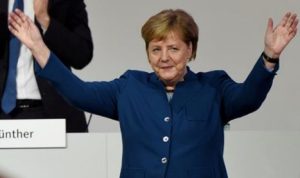 The hunt for money is moving into high gear in Germany. Prior to 2017, it was possible to buy gold anonymously in quantities up to €15,000. In 2017, this limit was reduced to €10,000. Now, Merkel has drastically reduced this limit to just €2,000 beginning in 2020. Any transaction greater than that amount requires the buyer to prove their identity and give their data to the gold trader.

While Merkel has allowed the refugees to pour into Germany, denying there are terrorists hidden among them, she has justified this reduction in anonymous gold purchases by arguing against money laundering to stop terrorism. This means that terrorist would be buying gold inside Germany, which on the other hand she denies letting them in to start with.

Merkel is not satisfied with imposing just a price limitation. She also wants to introduce the 50-gram rule, which would apply regardless of price. For physical gold buyers, this means they will not be able to buy a 50-gram ingot (1.60754 troy ounces) without the gold trader taking personal data and saving it for five years. This certainly applies if you tried to buy just two one ounces coins.

Merkel has formally justified this change in the laws on gold as a step in the fight against money laundering and terrorist financing. The government studies show that out of 77,252 cases registered in 2018 that suspected terrorism financing, only 175 cases involved precious metals.

Terrorism has been a real windfall for governments since 9/11. They have increased their powers globally and probably send thank you cards to the terrorists for handing them the excuse to create total financial surveillance that they use in the hunt for taxes.

The Merkel government has been making a concerted effort to introduce a total surveillance state and track the finances of its citizens. There is chaos in Europe with negative and punitive interest rates, high bank charges, and a declining euro. All of this is mixed with a prolonged economic recession in Europe since 2007 as we approach a 13-year decline in 2020. More and more Europeans are looking for ways to safely and anonymously invest their savings, which have been under direct assault by the government. This has been leading to the hoarding of US dollars and now the change in legislation on gold is only going to increase the switch to dollars.