QUESTION: Marty; I am trying to understand your comments that the Canadian real estate has peaked in real terms. Does this mean it will still rise as the currency declines as a hedge against the government in your shift from public to private confidence?

ANSWER: Canada will benefit from the capital inflows to North America which will not be as intense as those into the USA because of your government’s punitive actions against foreign investors and its sheer stupidity in understand international trends.

What I mean in “real terms” relates to the Canadian investor in terms of purchasing power. Here is an illustration of our Canadian Real Estate Index in both Canadian dollars and in Chinese yuan. You can see that from the Chinese perspective, Canadian real estate is still rising as a hedge against their currency. This means that the crazy laws being imposed against foreign investors and Justin Trudeau’s latest campaign promise to impose a 1% national 1% tax on foreigners owning property in Canada which he says will be applied to speculation and vacancy on applicable residential properties owned by “non-resident, non-Canadians.” Once he imposes the tax, you can bet it will rise rapidly from 1% because there is a complete misunderstanding of what is driving the real estate markets.

Here is the Canadian Real Estate Index in terms of Euro. Again, we are witnessing breakouts that are stronger in foreign currency than in Canadian. As we head into the Monetary Crisis Cycle, capital flight from Asia and Europe will continue and this will distort the profits they think they are making in real estate not understanding that they are playing the currencies.

Nevertheless, the is all part of the shift from Public to Private assets. While the “real terms” perspective of “value” may not be making new highs in purchasing power, this is still part of the shift from public assets. Some people will buy equities, others will go into real estate, and still others gold or other precious metals. The end game is to divest yourself of public assets and stay away from “fixed rate” investments where you are the creditor. Borrowers should be fixing their loans. 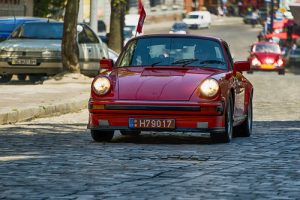 I worked with auto manufacturers in Japan and Germany. Their biggest problem was misunderstanding currency. A  911S Porsche in 1970 sold for $8,675 (31,579DM). In 1980, the same year the German automaker pulled its Turbo edition 911 in the United States, a new fifth-generation 911 cost $27,700 (46,507DM). The appreciation in dollars was 219% compared to an increase in Deuschemarks of only 47%. This created the image that German cars were better than American because they held their value. It was currency – not quality.

The majority of people just look at the price and do not understand that the currency swings can make a bad investment look good. You must always look at this from an international perspective.