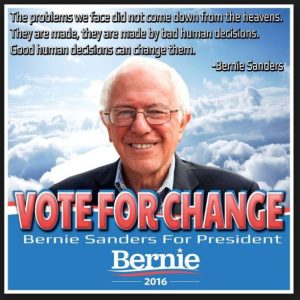 The war on eradicating the rich is fully on. Bernie Sanders realizes that Elizabeth Warren is rising in the polls among liberal Democrats, and Bernie knows how politics works. “Vote for me and I will rob other people for you.” They are competing now on how high they could raise taxes for the rich.

Warren’s proposed wealth tax would impose an annual 2% tax on all personal wealth above $50 million, so a family worth $100 million would owe 2% of $50 million or $1 million. The tax would rise to 3% for assets above $1 billion. Warren says her wealth tax would raise $275 billion per year, which she’d use to pay off student debt for millions, cover college costs for the majority of students, and finance universal childcare. What she fails to explain is that this is NOT an income tax. This is on the portfolio value. So say you bought a stock for $100 and it soared to $1,000 and you find yourself in that class but you have no cash. You will then be forced to sell stock to pay the tax. This is what destroyed small farmers who had to sell land to pay the inheritance taxes.

But it does not end there. You must pay the same tax every year even if the portfolio was the same price. If you had that in government bonds, you would face the problem that with low interest rates, you cannot earn enough to even pay the tax. Hm? Why buy government debt?

Sanders has gone further, more than doubling Warren’s proposed tax rate on billionaires. The Sanders plan has a lower threshold for wealth and higher tax rates. His plan has 8 different tax levels, starting with a 1% tax on wealth above $32 million. The rate would rise to 2% on wealth from $50 million to $250 million, with a top rate of 8% on wealth over $10 billion. Sanders says his plan would raise $435 billion per year, which he’d use to fund a single-payer health plan, more affordable housing, and universal childcare.

Both of these people are really economically illiterate. If you bought a home in 1965 for $20,000 and it is not worth $2.5 million, you are taxes on current value. This is the most destructive tax ever dreamed of for it will devastate people based on inflationary values. There is no mention of indexing it to inflation. Of course not!

How about we simply forgive student debt and call it a day? All of these proposals are about raising taxes and never looking at the subsidized problem in student loans and health care that was created in the first place. Once the government subsidizes anything, the prices rise because they know the government will pay the bill. They fund degrees that are worthless and universities are happy to take the money with no responsibility if the degree will ever land you a job. There is no free market competition whatsoever. Health care should simply be turned into a public utility. It will never be reformed in this manner by just paying whatever bills the government is handed.