Why People Fail to Understand There are Cycles to Everything 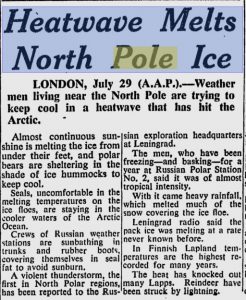 There tends to be a fairly regular 21-year cycle in extreme climate shifts with respect to volatility. There was the extreme cold of 1936, followed 21 years later with a heatwave that melted the ice in the arctic, and then going into 1978 they were talking again about the deep freeze.

Indeed, TIME magazine’s January 31, 1977, featured the cover story, “The Big Freeze.” They reported that scientists were predicting that Earth’s average temperature could drop by 20 degrees Fahrenheit. Their cited cause was, of course, that humans created global cooling. Then suddenly the climate cycles shifted and it began to warm up.

I find it astonishing how people just do not understand that cycles even exit. They think only in a linear fashion that every day is supposed to be the same and if it isn’t, OMG, somebody is to blame.