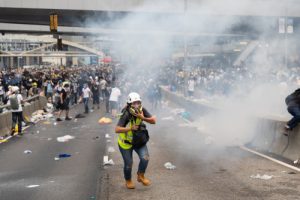 There is no question that the rioting in Hong Kong has been violent as protesters even set cars on fire. Business is very concerned for as this continues, it does threaten the shift of the financial hub to Singapore. We have clients on every side of this issue over here as we have three offices in Asia. So we have the concerns from all sides. There is a fear that if China is forced to send in troops that this may break the peg and result in financial business moving to Singapore. So the stakes are rather high over here.

Tony Tsang, the 18-year-old Hong Kong student protester who was shot in the chest by police at close range as he fought an officer with a metal pipe on Tuesday. He was charged with rioting. He faces a maximum 10-year sentence for assaulting a police officer. Police have urged the government to impose curfews as the violence continues to escalate. China has increased its troop strength on the border and the Hong Kong economy has been taking a nosedive.

The extradition bill that began the protests has been withdrawn. However, that is only one of their five demands. The protesters have also demanded an independent probe into the use of force by police; amnesty for arrested protesters; a halt to categorizing the protests as riots; and the implementation of universal suffrage. 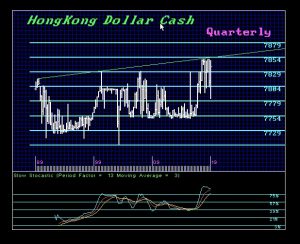 The Hong Kong dollar peg will either break or be allowed to readjust and the two targets appear to be November and January. The ideal targets seem to be 789 and 797. This is when the risk will be at its greatest. Keep in mind that it could come prematurely in October or December. The key weeks ahead for turning points appear to be 10/07, 11/04, 11/18, and 12/02.

The View from Business

COMMENT: Marty, you’ve always been vigilant against biased news from FNF (Fake News Factories.) So I’m hopeful I’ll get an audience in you. In your recent blog “Hong Kong & Risks in Asia” (9/27) you’ve finally used the word “violent” to describe the rioting in my hometown.

As usual, you were the first to call it as it is, but then you hastened to add that the police threw tear gas, as if that had precipitated the violence! I must assume you’ve been fed the same fake news that we get here in the west, even though you’re currently in Asia.

The picture the FNFs painted of Hong Kong is a lonely cry for help. However, the flip side they don’t show is the destruction, business closures, loss of jobs, and fear for life and limb that the rioters have brought upon the silent majority. They’ve set fire to cars, homes, and MTR, shut down the airport, beat up tourists and the elderly, even stormed government offices and destroyed everything inside!

Try that on the White House and watch them drop you like flies! If MY police is faulted for “excessive force” in protecting us the same way, then the only thing “excessive” is the taxes I paid the government. To be sure, most Hong Kong residents would welcome universal suffrage, but we denounce terrorism and wish to restore peace and order. However, with the biased media fanning the fire, I can see civil war within the city of Hong Kong by your 2020 ECM turning point.

In summary, may I point out that in the past 3 to 4 decades, Hong Kong has prospered incredibly with the rise of China, and did so without even a semblance of democracy, under the Brits or under China. But what we did have was peace and order. We really like to have that back now. So if the world honestly wants Hong Kong to have something it deserves but isn’t getting, please stop fanning the fire. Hot heads (on both sides) need time to cool.

REPLY: I am NOT suggesting that the police acted first with tear gas. That was a response to the riots.