WEC Tickets – Verifying if We Have Seats Available

We have a number of people who buy the tickets to get all the materials but do not actually fly to the United States to attend. We are trying to work out how many seats we may have available. We were trying to keep the audience smaller this year, but given the seriousness of the world, we exceeded our limitation of 500 and reached 700. We are trying to work out exactly how many seats we can still accommodate. This year is obviously critical with all the chaos going on from the liquidity crisis, currency moves, a decline into the ECM low, civil unrest — it just seems like whatever can go crazy, just is.

Attendees will get their autographed hardcover edition of  “Manipulating the World Economy,” which is a detailed account of central banks and how the entire system has been managed. The system is now slipping through their fingers, and this is the first time in modern history where such things have converged. Historical accounts exist, but well before the 17th century. This is why a major database is required to simply reveal the real possibilities based upon the historical outcomes. Opinions will not cut it when nobody has experience in what face and daily charts post-Great Depression will not help this time. 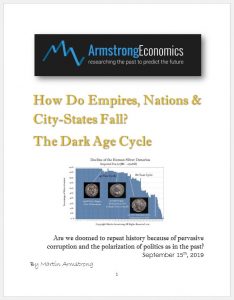 For the first time,  we are publishing “The Dark Age Cycle” for attendees. A special report on “How Do Empires, Nations & City-States Fall” is also the first time I have put this all together using the reconstruction of the world monetary system.

This special report will undoubtedly become a classic for it has pulled together decades of research to answer that burning question: How fast do empires actually fall?

We can argue for various reasons. However, the critical question is timing. That is what this report illustrates above all else – the timing. 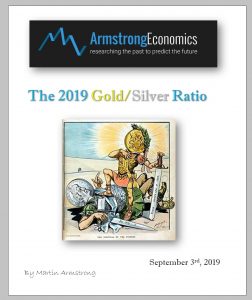 I have also completed probably the most documented report on the precious metals ever written, tracing the ratio and how these metals have responded in times of financial stress.

This report traces the ratio from 8:1 to 120:1 and why it has moved. Yet most of all, what has been completely overlooked is the fact that people do not understand that the ratio was manipulated as part of Quantitative Easing even under the gold standard. Sorry central bankers, it failed to work then and nearly bankrupted the economy.

I have also put together a report on “Hoarding Dollars” and the implications for the world foreign exchange markets. Here, you will have a guide to the currencies and how they will impact the future as we head into the “Monetary Crisis Cycle” in the years ahead.

Virtually 70% of the physical paper US currency is now circulating outside the United States. On top of that, there are now more $100 bills than $1 in circulation, and they mainly exist outside the US.

As the world has turned toward outlawing cash transactions to eliminate cash altogether outside the United States, the trend has shifted toward hoarding dollars. That is just not considered in the analysis these days of the future prospects in currency. This report provides the forecasts for all the strategy currencies going forward. 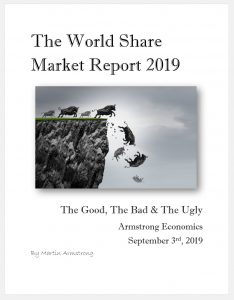 In addition, attendees will be provided with the special report for year-end on the “World Share Markets – the Good, the Bad, & the Ugly.” With the majority of economists now talking up a bear market and a recession in an effort to desperately overthrow Trump in the 2020 election, it is no wonder that the share market outlook is anything but clear.

The world share markets are by no means all in the same position. Their fates will also depend upon their underlying currency. Will Shanghai recover or continue to decline? Has the German DAX lost its gilt edge among European share markets? What about London in the face of BREXIT? Will the Southeast Asia be impacted by China ?

Then attendees will also receiver the “Monetary Crisis Report.” Here we have provided the details on this cycle and how it has performed in the past with its implications for 2021/2022.

Granted, the price of the ticket virtually covers the cost of all these reports if purchased separately. In addition, we will be providing video updates to Rome and Orlando attendees as we head into this crisis so you are kept up to date as things unfold.

So welcome to this year’s 2019 World Economic Conference. We have reduced the number of seats this year because we had a large conference in Rome with over 300 attendees. These events have become too large so we are trying to reduce the size of Orlando’s event and hopefully provide a more intimate setting as it takes place with the overseas WEC events.

** If you do not plan to attend the Orlando WEC in person, please indicate “Remote Attendee” in the Special Needs Assistance field on the registration form. 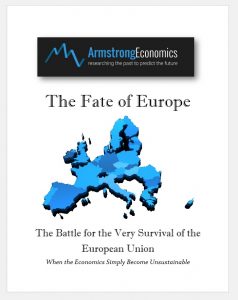 Also for the first time, “The Fate of Europe” report was sent to Rome WEC attendees earlier this year and will be made available for sale in our store shortly. Here, you will learn the shocking reality behind the curtain of the euro.

Although not included with the Orlando WEC materials, “The Fate of Europe” is a very important report to understand the backdrop to what we face going forward. Like the Great Depression, the crisis will begin in Europe and spread like a contagion.

Nigel Farage delivered the keynote speech at the Rome WEC. He called the World Economic Conferences we have been holding since 1985 the “alternative to Davos.”