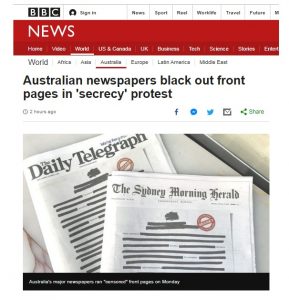 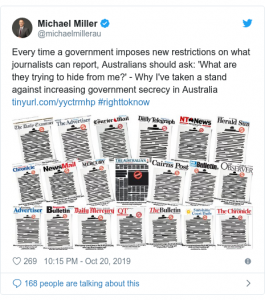 We have lost all of our freedoms, we are just too busy to take notice. The pretend whistleblower against Trump was orchestrated by Democrats to create an issue for 2020 to impeach Trump. The real whistleblower, Edward Snowden, has to live in Russia for they would imprison him under Treason. In Australia, a whistleblower exposure corruption in the government resulted in raids on newspapers to uncover who the whistleblower is. The press has protested but publishing redacted headlines illustrating how the press is NO LONGER free to actually report the truth. This has led to a protest by the newspapers in Australia when their offices and journalist’s homes were raided by the government.

We are saddled with nothing but corruption and fake news. Even in school, Wikipedia is not allowed to be cited as a source for so many pages are being politically manipulated. If the info on Wikipedia is politically slanted, it is for a very good reason – political propaganda.

We are spiraling toward authoritarianism at a dangerous pace. This is a PRIVATE WAVE so the government has been losing power. They know that and from 2016 onward, we are being confronted by an ever-increasing attempt to impose authoritarianism. This is just not going to end well by the time we reach 2032 – if we can make it that far.