Trump is 3rd President to be Impeached – But Will This Cost the Democrats? 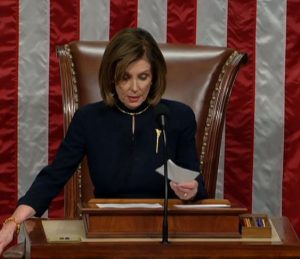 The House voted to impeach Trump as expect along party lines 230-197 to charge Trump with abuse of power and 229-198 to charge him with obstruction of Congress. Only two Democrats voted against both articles, Reps. Collin Peterson of Minnesota and Jeff Van Drew of New Jersey. They are expected to soon switch parties and become Republicans. A third, Rep. Jared Golden of Maine, voted for only one impeachment article.

Rep. Justin Amash of Michigan who was a Republican and claimed to have turned independent voted to impeach Trump on both counts. Rep. Tulsi Gabbard of Hawaii did not vote and just said presently because she is running for the Democratic presidential nomination. 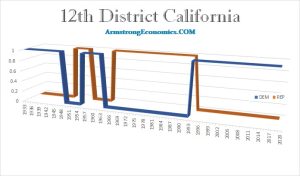 The interesting question will be just how will this impact the 2020 election. The Democrats are now trying to recuse Republicans in the Senate as if the Democrats are unbiased. It really is very sick how the political system has just collapsed. When the Republicans impeached Clinton, Newt  Gingrich lost his seat. Most people would never guess but Pelosi’s 12th district has been notorious. The 1946 election in the 12th district saw the five-term incumbent Democrat Jerry Voorhis lose to the Republican challenger Richard Nixon, who would later become president. There is clearly a risk that Pelosi could lose in 2020, but she will be gone clearly in 2022. The Republicans held the 12th district for 31 years. That trend has been nearly matched by the Democrats. It does look like the 12th District will flip Republican by 2022. That is very curious. Do Californians rise up against taxation at last?