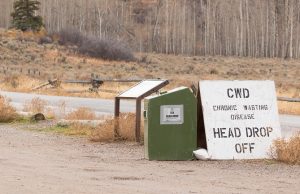 Most people have never heard of Chronic Wasting Disease (CWD) but it is a highly contagious neurological disease affecting deer, elk and moose. CWD causes a characteristic spongy degeneration of the brains of infected animals. This results in emaciation, abnormal behavior, loss of bodily functions and death. The risk of CWD transmission to humans remains unknown. However, in a test conducted to determine if nonhuman primates were susceptible to CWD, two squirrel monkeys were inoculated and contracted the disease.

Preliminary testing warns that it is possible for CWD to infect humans. So far that has not taken place. Hunters might not want to be eating venison these days and should consult the environmental agencies of the state you are in. It has now spread to Pennsylvania and even New Jersey.